Connection between cosmic rays, clouds and radiation budget is reaffirmed…CO2 role thus has to be much smaller.

There have been a flurry of recently published studies on radiative forcing and its variation due to cloud changes.

The latest is a new study published in the journal Nature. Climate scientists Dr. Henrik Svensmark and colleagues have found that cosmic rays, or variations in ionization, are closely related to the formation of aerosols and clouds, and that “low-liquid clouds are mainly responsible for the change in net radiative forcing.”

The results are groundbreaking: The connection between cosmic rays, clouds and radiation budget is reaffirmed.

Atmospheric ionization produced by cosmic rays has been suspected to influence aerosols and clouds, but its actual importance has been questioned. If changes in atmospheric ionization have a substantial impact on clouds, one would expect to observe significant responses in Earth’s energy budget. Here it is shown that the average of the five strongest week-long decreases in atmospheric ionization coincides with changes in the average net radiative balance of 1.7 W/m2 (median value: 1.2 W/m2) using CERES satellite observations. Simultaneous satellite observations of clouds show that these variations are mainly caused by changes in the short-wave radiation of low liquid clouds along with small changes in the long-wave radiation, and are almost exclusively located over the pristine areas of the oceans. These observed radiation and cloud changes are consistent with a link in which atmospheric ionization modulates aerosol’s formation and growth, which survive to cloud condensation nuclei and ultimately affect cloud formation and thereby temporarily the radiative balance of Earth.” 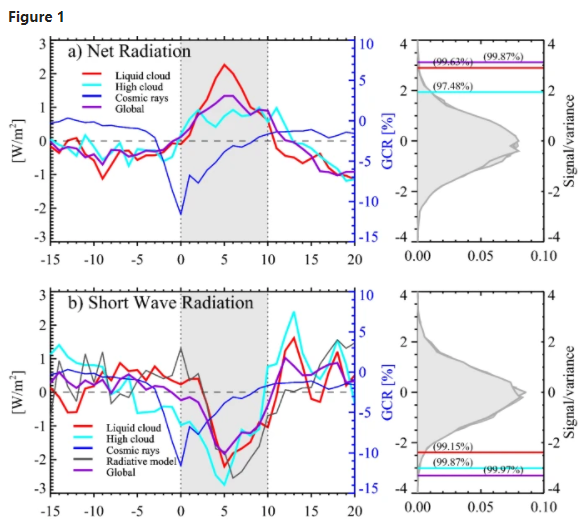 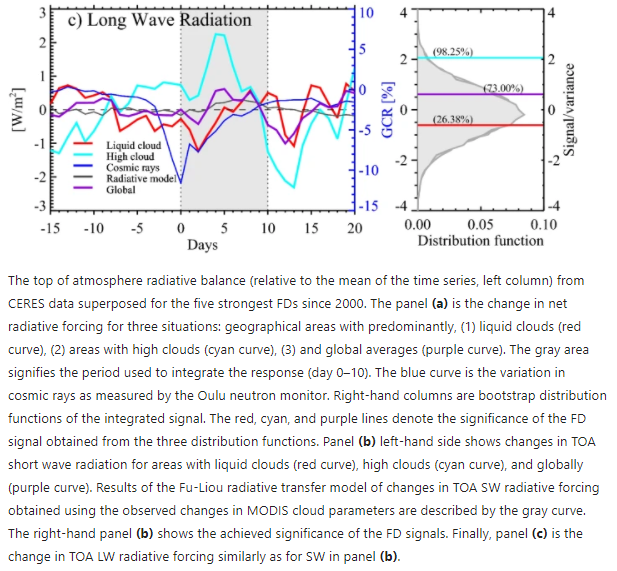 “The magnitude of the impact of solar activity is large, with the Earth absorbing nearly 2 W/m2 of additional energy within 4 to 6 days of the cosmic ray minimum,” the press release for this study states. This is the same net forcing that CO2 exerts in 270 years.”