German online heise.de reports here that the European Commission now “aims to classify nuclear power and natural gas as sustainable”, likely in a bid to avert an energy supply meltdown.

Previously Europe had excluded nuclear power and natural gas as a climate-friendly source of energy, but now that energy prices have begun to skyrocket and power grids become unstable and risk blacking out, Europe appears to be waking up from its wind and sun fantasies.

Suddenly nuclear and natural gas (a fossil fuel) will be joining renewable energies wind and solar power as being “sustainable and climate friendly”.

“The taxonomy is intended to show investors in the EU clear criteria as to which financial products benefit climate protection. The EU Commission presented a package on this in April 2021, which is to regulate the details,” reports Heise.de. “The question of whether investments in natural gas and nuclear projects can also be sustainable was left aside by the Commission.” 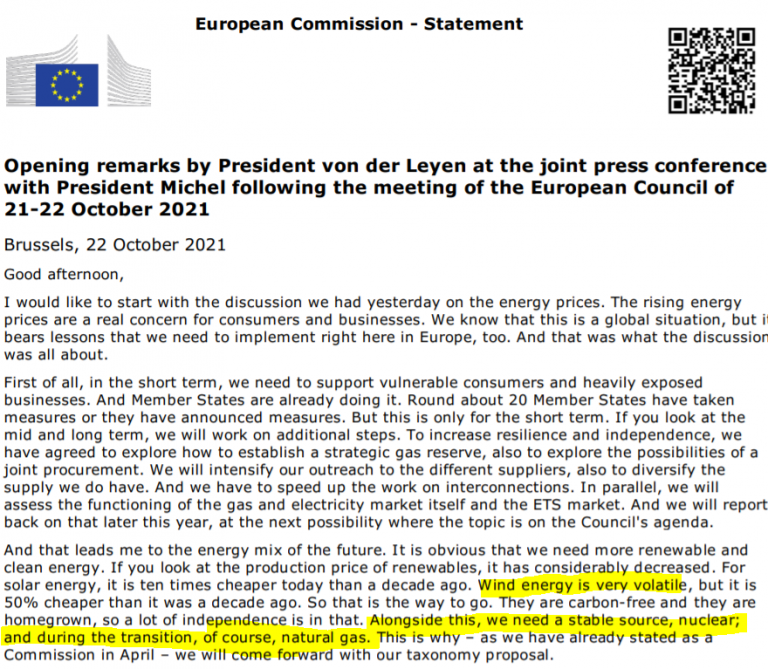 EU Commission president Ursuala von der Leyen wrote in a statement (above) that the production costs for solar and wind energy had fallen over the past ten years and that renewable energies are the generally “the way to go”,  yet conceded “wind energy is very volatile” and that Europe needed “a stable source, nuclear; and during the transition, of course, natural gas.”

“This is why – as we have already stated as a Commission in April – we will come forward with our taxonomy proposal,” the EU Commission statement added.

Nuclear will be unavoidable

Of course the Greens in the European Parliament flipped at the plan to massively boost gas and nuclear generated power. MEP Sven Giegold called the EU Commission’s announcement a “worst imaginable disaster” for Europe’s energy transition.

The return to energy sobriety was nudged on earlier this year by seven EU members, reports Heise.de. “Among them was France, whose President Emmanuel Macron also recently announced ‘mini-nuclear power’ as part of a strategy to make his country carbon-neutral.”