Zurich’s online NZZ daily warns that come autumn, inflation in Germany could reach “double-digit figures for the first time since 1951”.

The inflation rate in Germany in August rose to 7.9 percent, up from 7.5% a month earlier. 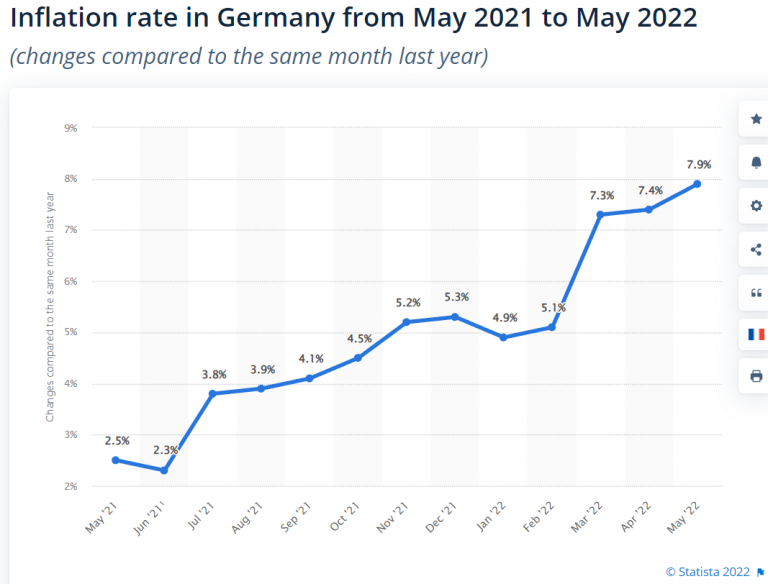 “At such a rate, the purchasing power of money melts like snow in the sun,” writes the NZZ. In early 2021, inflation was tame, near 2%, but then soared to over 5% by autumn – long before the start of the Ukraine war.

“In the euro zone as a whole, inflation is at a record high 8.9 percent.” reports the NZZ “So there can be no talk of the hoped-for easing of the situation. On the contrary, the situation in Germany is likely to get even worse.”

Tax breaks given earlier this year on fuel are running out today and heating gas levy hikes slated for October will continue to add to inflation in Germany, and across Europe.

The main driver behind Germany’s inflation are energy prices, which rose by almost 36 percent in August. The high costs of energy are pushing food prices up. No relief is in sight.

Though Europe’s incompetent leaders try to blame Vladimir Putin’s war in Ukraine for the economic woes, the NZZ reminds that “the field for above-average inflation rates had already been tilled beforehand.” The major factors driving inflation are extremely reckless monetary and energy policies. Things are about to get much uglier.

Shutting down reliable conventional power plants while gas supplies tighten and green energies fail to deliver has been a major driver of the whopping 36% energy inflation seen in August.

The European central bank (ECB) has also moved too slowly in raising its interest rates. On September 8th, it is expected the ECB will raise the rate another 0.5%. Too slowly, some experts warn.