Green Raw Deal: Climate Fanatism Has Put Us Full Throttle On The Highway To Hell

In the months-long drum-up for the big Jamboree of climate fanatics in Sharm el Sheikh a few weeks ago, politicians, NGO’s and the mainstream media have done their best to mask an inconvenient truth that will preoccupy us for a long time to come: the massive recession that the climate policies in our countries have brought upon us.

This undeniable truth can be clearly seen when looking at the Nasdaq, a fairly good gauge for the state of the economy and the seriousness of recessive developments: 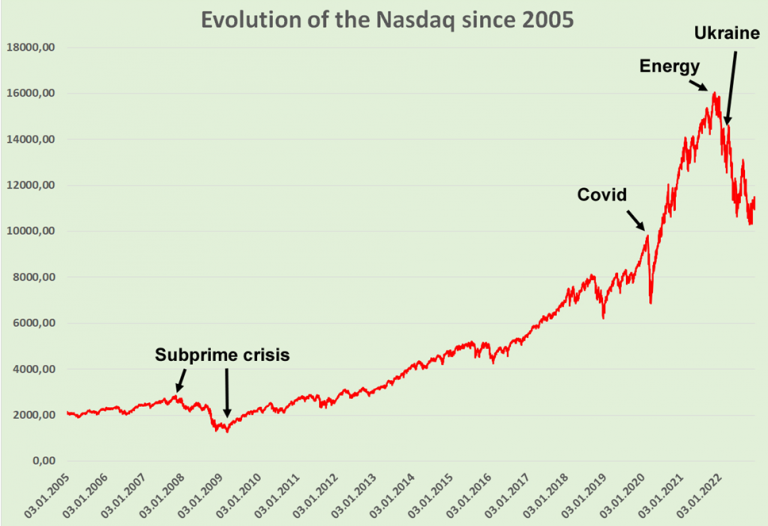 The graph shown above may be compared to the fever graph of a hospital patient. It is a fairly good indicator of the current state of the economy reflecting ups and downs and their severity.

For the past 17 years, several minor disturbances aside, we can identify three major setbacks linked to specific events. Their severity cannot be deducted directly by comparing the absolute differences. This is due to the fact that over time, the Nasdaq is subjected to constant growth as a result of the upswing in the collective wealth of the US shareholders. It is thus more appropriate to assess the severity of such declines by calculating the relative difference between max- und min-value before and respectively after the event. This yields the following results:

The last two positions on the list should be viewed as a cluster where, especially in the second phase, aspects of energy/economy and war have become inextricably intertwined. This cluster has up to now achieved a combined value reduction of the Nasdaq of up to 36%, by far the strongest decline of the past two decades. Unfortunately, it is also the most dangerous, pitting east against west in a conflict with an intensity not seen for several decades. Far from being over, it has the potential to drive us into a full-blown world war with a nuclear superpower, with possible consequences far beyond the imagination of most people now living in our countries.

Unfortunately, the main driving force of this cluster has now shifted from the economy to the military theatre, with a spiral of tit for tat provocations drawing the participants ever deeper into a quagmire with no end in sight.

The Russian side, initially surprised by the level of Nato-driven modernisation of the Ukrainian army, has in the meantime been digging in its heels and has managed to stop the Ukrainian counter-offensive, with horrible losses on either side. Both these developments have left their mark on the Nasdaq in the form of short-lived bear market rallies: 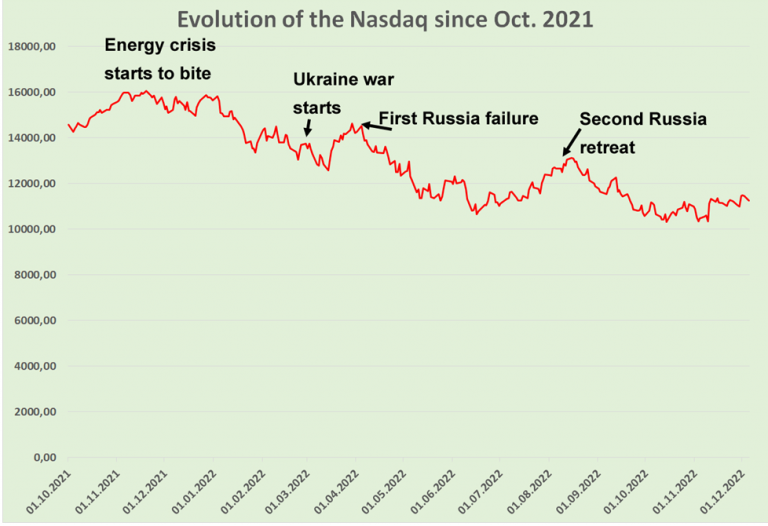 Fig. 2. The ups and downs of the Ukraine war have left their mark on the Nasdaq chart.

The obvious consequence of this war is the aggravation of an already dire situation initially brought about by the self-inflicted energy crisis that started to weigh on the Nasdaq chart since November 21, three months before the Ukrainian conflict broke out.

The underlying reason is the West’s policy of punishing companies exploring for and extracting fossil fuels by restricting their access to the financial market. The resulting shortage of coal, oil and natural gas inevitably resulted in skyrocketing prices for these assets, with companies and states frantically trying to secure their supplies of these vital energy sources. No wonder thus that these prices literally exploded when the West decided to boycott one of the biggest exporters of fossil fuels. But not for long. In the meantime the prices have shown deep declines not only for oil and gas, but also for most mineral commodities.

Recession has stepped in

The reason for this puzzling trend, at first glance, is that the related markets now seem to expect a long and severe recession. Reduced industrial activity implies reduced demand for all sort of commodities, and these expectations have dragged the prices down. The gravity of the situation is highlighted by the fact that even a noticeable production reduction by OPEC+ has not stopped oil prices from falling below the mark of 80 US$ per barrel.

This combination of a misguided energy policy and a war, which shows no sign of abating anytime soon, is a toxic mixture that may threaten all of us.

Looking at the military side, Russia has been able to stop the recent advance of the NATO-backed Ukrainian army. The current situation reminds the frozen frontlines of the first World War, with massive artillery duels and fierce disputes over trenches that endlessly changed hands. Some sources hint at current Ukrainian losses of up to 1,000 killed or severely wounded soldiers per day, a rate the country might not be able to sustain forever. In spite of this fact, the West has opted to entrust the decision over peace or war to the Ukrainian leader, whose preconditions for peace talks amount to demanding an unconditional surrender of Russia. Some regard him as a fanatic wanting to fight to the bitter end. And we have vowed support, “whatever it takes”.

In the meantime, the economic and societal fallout of the recession aggravated by the conflict is mounting. The US and Europe are engaged in a fierce competition to determine who will be able to ruin their economy first – by sinking billions into senseless “climate-saving” investments that are nothing else than “instant” stranded assets.

And worse still: unfazed by the decline in share value putting US pension schemes at risk, the Biden administration is about to trigger a massive trade war with Europe and other allies through “green” protectionism schemes such as the electric car subsidies enshrined in the IRS 1) legislation. We all seem to be heading towards interesting times (an old Chinese adage).

18 responses to “Green Raw Deal: Climate Fanatism Has Put Us Full Throttle On The Highway To Hell”