Browse: Home / 2022 / December / 14 / Germany Will Turn Into A Huge Industrial Wind Turbine Junkyard, “If Government Gets Its Way”

Germany Will Turn Into A Huge Industrial Wind Turbine Junkyard, “If Government Gets Its Way”

Wind parks threaten to change Germany into an industrial wasteland and future junkyard that will stand as a monument to the greatest environmental folly of all time.

As Germany and Europe race ahead to eliminate fossil fuels and cut off their gas supplies, plans are being drawn up to reduce the hurdles against wind park permitting in a desperate bid to ward off catastrophic energy shortages.

That means more wind turbines everywhere, if the government gets its way.

Last weekend I drove the road between the north German city of Aurich and the North Sea village of Dornum. One particular stretch (click on link) went through a literal jungle of wind turbines, rendering any natural beauty the region previously had to a grand eyesore.

For many once picturesque areas in Germany, this may soon be the green future. And because politicians are pushing to reduce the setback distances from residential areas, such eyesores will soon be towering over residents’ backyards.

Another example is presented in a talk by Professor Fritz Vahrenholt, where he shows the village of Struth in Thuringia. He reminds the audience “this is no photo montage”.  It’s the real deal that the people there today have to look at all the time: 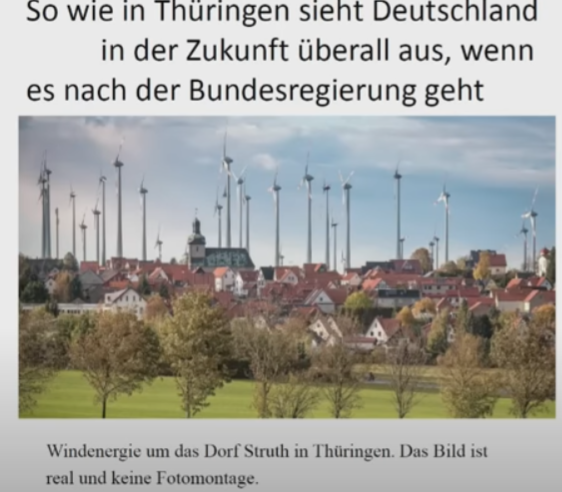 Vahrenholt writes on the slide, “Like in Thuringia, this is how Germany will appear everywhere in the future if the federal government gets its way.”

The road to Dornum (described above) looks just like the village of Struth, but on both sides – for kilometers!

Along the North Sea coast near Dornum, I also snapped the following photo of a flock off geese flying by, with a wind turbine in the background and right next to a protected nesting area! The turbine wasn’t more than 500 meters away. 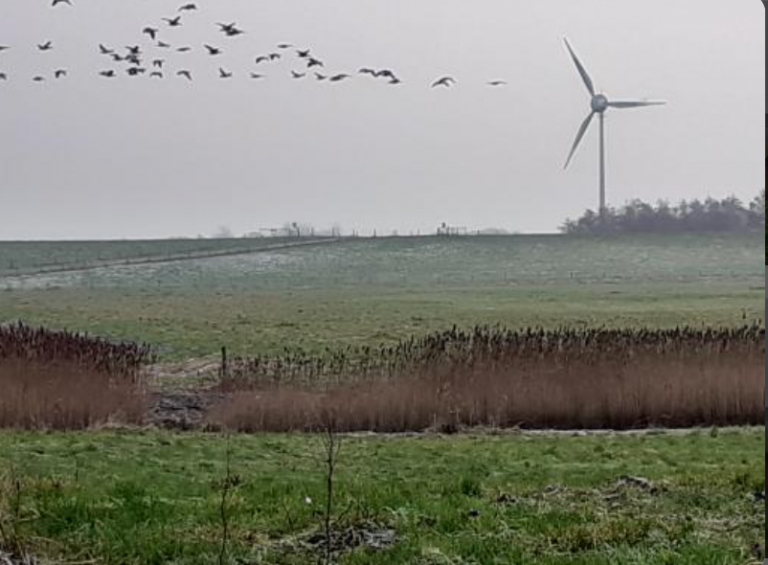 6 responses to “Germany Will Turn Into A Huge Industrial Wind Turbine Junkyard, “If Government Gets Its Way””