The German DWD Weather Service reassured the German government and public in November: “The German Weather Service’s winter forecast is good news for all energy consumers. We expect a comparatively mild winter. If the model proves to be right, we will be able to save heating energy as a result.”

Winter not cooperating…colder than expected temperatures

That sounds like governmental whistling in the woods by now, because the latest medium-range weather forecasts from the European ECMWF (European Centre for Medium-Range Weather Forecasts) predict a sharp cooling by the 4th of Advent (see below the forecast for the 4th Advent, source: Kachelmannwetter.com). 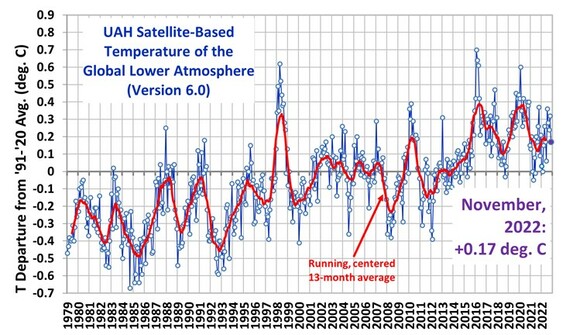 The graphs above show the cold weather extending from Poland to northern France. France’s electricity consumption, a significant portion of which is used for heating, has a major impact on electricity supply and electricity prices in Germany in the absence of sufficient nuclear capacity.

For those who want further daily information, please refer to the Where’s the Global Warming page.

Globally, the indices also show no warming (Dr. Roy Spence). The deviation of the global temperature from the 30-year average of the satellite-based measurements of the University of Alabama (UAH) has decreased from 0.32 degrees to 0.17 degrees Celsius in November 2022 compared to October. The average temperature increase per decade since 1979 is still 0.13 degrees Celsius – no indication of a worrying or even catastrophic trend.

On the contrary: sea ice extent in the Arctic has increased again since 2016. Since 2016, global temperatures have been declining slightly.

How long will the stored gas last?

“The availability of energy for electrical power generation is assured for this winter,” said German Economics Minister Robert Habeck, Green Party, at a press conference in South Africa on the security of electricity supply in Germany. But if we analyze where the electricity is coming from in Germany these days, it is anything but reassuring.

How can Germany go without coal, nuclear?

Look below at the light brown area in the graph of electricity from natural gas, the most expensive power generation with the scarcest energy we have. However, if expensive fracking gas is to additionally replace the dark brown and medium brown areas of lignite and hard coal and the red areas of nuclear energy, then we already know today that electricity prices will continue to go through the roof. The  current coalition government would not survive that.

Even a moderately cold winter presents the government with barely solvable problems. The storage facilities are already emptying at a rate of 0.5% per day. Anyone can calculate how long storage facilities, which are 94% full (Dec. 10, 2022) and, according to the federal government’s specifications, should still have a 40% storage level in February, will last if the cold continues.

It may just be fine with luck. But what will happen next winter?

In view of this state of affairs, how can the Chancellor roundly reject the extraction of gas from shale rock? Quote: “Investments in German shale gas production would hardly be worthwhile because it would take too long to use domestic sources – by then gas demand will have decreased significantly.”

There are three mistakes in this statement: it is economically worthwhile because it would be 1.) much cheaper than US fracking LNG gas, 2.) it would also take only one year until the first gas could flow (which would be the case now if the German government had acted responsibly) and 3.) gas demand will by no means decrease. Three mistakes in one sentence with fatal consequences for Germany as a business location is not something you hear every day from a German chancellor.

After a gas and electricity crisis, now also an oil shortage

Before the Ukraine war, Russian oil covered 35% of the oil needed in this country. Although there is still no European import ban on pipeline oil, Economics Minister Habeck had promised the EU that as of January 1st, no more oil would be sourced via the Druzhba pipeline, which supplies the Schwedt and Leuna sites. The alternative supplies via Rostock or Gdansk will only cover part of the pipeline imports. Politicians are keeping silent on the price.

Added to this are now the EU’s boycott decisions: oil supplier Russia is to be paid only $60 per barrel of oil, although the world market price is significantly higher. Putin has already stated that Russia will not supply on these terms. Now there are two possible consequences of the EU decision. Russia has already acquired a shadow fleet of 100 tankers to transport its oil to other regions. If Russia succeeds in placing all its oil with other market participants such as India or China, this would have few consequences for all market participants – except for Germany, which has so far imported cheap pipeline oil from Russia.

However, if Russia does not succeed in placing all its oil, there would be too little oil on the world market. OPEC+ has already announced that it will not increase oil production. In this case, oil prices would rise while demand would remain the same worldwide. Such a boycott would probably be called a knee-jerk reaction.

With best wishes for a Merry Christmas and a Happy New Year
Yours,
Fritz Vahrenholt