Right on schedule, winter will be making its real debut at the end of this week as a colder air mass pushes westward into Central Europe, so writes German weather portal donnerwetter.de here.

This does not come as any surprise to those who ignore the warming hysteria in the media and follow the observed data. Today, according to the European Institute for Climate and Energy (EIKE) here, data from the DWD German national weather service shows that winters in Germany have been cooling significantly and in parallel with those in Austria for close to three decades – despite rising CO2 emissions. If Co2 has a warming effect, it hasn’t been seen in Central Europe since James Hansen testified before Congress in 1988! 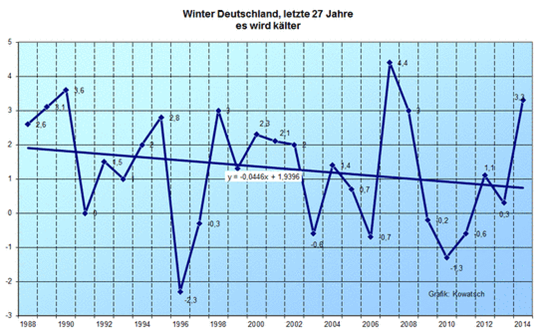 EIKE also presents a mean winter temperature chart for Germany since 1882. Here we see the long-term trend is modestly upward. 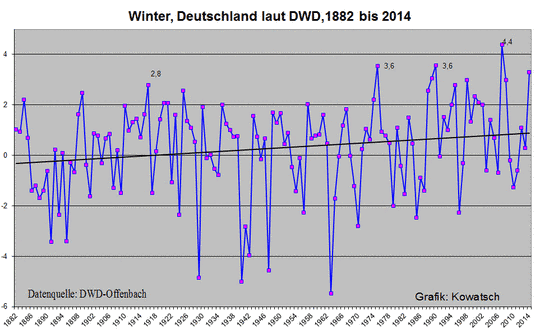 But EIKE adds that there is a good explanation for this modest warming:

The reason for this heat is mainly the consequence of the urban heat island effect. During the above period, Germany has changed profoundly. Compared to the much smaller and far less frequent heat islands back then, today’s heat islands are far more expansive and involve heat zones. And the surface measurement stations in 2014 are sited differently than they were 130 years ago. Forest chalets at the edge of wilderness and unheated monasteries no longer exist. The surface measurement stations, often under the same name, have been moved to inside heat islands where people live and heat mightily in the wintertime. And also the weather stations next to the landing strips of our airports in conjunction with the hot exhaust of jet engines did not exist 130 years ago. All homes are heated entirely today, and not just 2 or 3 rooms like 50 years ago. This applies to both Germany and Austria. Today’s thermometers are simply measuring man’s additional heat along with that of nature.”