Share this…FacebookTwitterIn a previous post, Trend in Global Fires, data analyst Zoe Phin showed the global fire trend for the last 21 years. Since then, Zoe has taken it it a step further and found a source with more data going back to 1982: from a project funded by European Space Agency. RHere. Actual data is […] 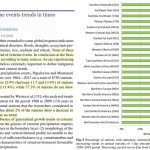 Share this…FacebookTwitterAfter a thorough examination of extreme weather indices across the globe, scientists (Alimonti et al., 2022) have concluded “none of these response indicators show a clear positive trend of extreme events.” Therefore. “the climate crisis that, according to many sources, we are experiencing today, is not evident yet.” There is an “absence of generalized […]

Share this…FacebookTwitterThe Austrian Alps have seen no trend change in terms of precipitation since 1880, official data show.  Climate alarmists have climate horror scenarios for every corner of the globe, and that includes the Austrian Alps. Climate models warn that snow will disappear soon and even gravely harm the ski industry unless we vaccinate the […]

Share this…FacebookTwitterIn the following video, Tony Heller exposes what a fraud the “climate crisis” of today really is. Those demanding we completely overhaul our liberal socio-economic system and play risky socialist experiments on it because of the “man-made climate crisis” are political snake-oil salespeople. As Tony shows, extremely devastating weather events are nothing new and […] 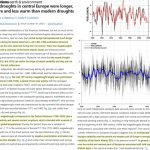 Share this…FacebookTwitterA new study affirms Europe’s worst one-year droughts of the 21st century (2003, 2015, and 2018) have been far less severe than the 50+ consecutive years of “megadroughts” linked to the solar-minima-induced coldest decades of the 15th to 19th centuries. There is a clear link between cooler temperatures and aridity documented in the scientific […] 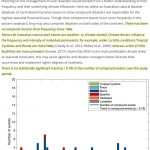 Share this…FacebookTwitterThree new studies affirm there has been no significant change in natural disasters, precipitation, or bushfire across Australia for the last several decades. Instances when perilous flooding, drought, bushfire, cyclones, storms, heatwaves…occur at the nearly same time are classified as “compound disaster” events. Across Australia, there has been no statistically significant trend in compound […]

Share this…FacebookTwitterBy Frank Bosse (Die kalte Sonne) Over the past few summers, the media have been repeatedly tried t sell us an “increasing summer rainfall deficit” as an effect of climate change. What about precipitation at the end of summer 2021? Chart: Summer precipitation. Data source German DWD national weather service. Image by Frank Bosse […]

Share this…FacebookTwitterMadagascar’s current drought is perfectly within normal range. Droughts were even worse in the past, 2000 years of precipitation reconstruction data show… Linking Madagascar drought to climate change “scientifically not correct” Not surprisingly, there been lots of climate doomsday talk about the drought and hunger situation in Madagascar, all coming from the usual suspects. […] 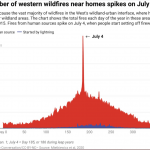 Wildfires Spike Every Fourth Of July, When Americans Celebrate “Independence”

Share this…FacebookTwitterJust a couple of anecdotes today… Happy 4th of July everyone, though personally I don’t there’s really much left to celebrate anymore. Government lockdowns and social media censoring of legitimate opposing opinions remind me of Cold War time Communist countries. We’re not free anymore, and so celebrating “freedom” is a bit of joke. Independence […]