Here’s a presentation by the past Chairman of the American Solar Energy Industry, Armageddonist Chuck Kutscher, another person who can only be happy if he’s convinced the future is filled with doom and gloom.

This is Al Gore repackaged. This is really a sorrowful, populist presentation. How did Kutscher get a PhD! We will redebunk this point by point.

It’s getting late – and I’ve watched the first half. Will finish tomorrow.

I can’t believe there are so many gullible suckers out there like Chris taking this crap in hook, line and sinker.

1. 4:30 mark – “Well-heeled misinformation campaign.” That’s bogus. Most of the doubt arises from privately run blogs with little or no money (Climate Audit, WUWT, etc.) and a rapidly growing number of skeptical scientists who are finding loads of flaws in the science. From time to time some media outlets are reporting on this. Public observation has also failed to detect the occurrence of any of the horror predictions. The warmist movement on the other hand is funded by billions.

2. 5:00 mark – “Climategate e-mails show the scientists wanted to get the message out.” Oh, that’s why they defied the requirements of thr FOIA and refused to make the data public. Read The Hockey Stick Illusion

3. 5:30 mark – “Independent panels exonnerated the Climategate scientists.” It’s proven that these were whitewashes led by warmist hacks. McIntyre has gone through all that.

4. 9:15 mark – “Mann’s hockey stick was fundamentally correct.” The national Academy of Sciences said Mann’s hockey stick was rubbish. The new ones that were made to replace it were also shown by McIntyre to be flawed as well. Don’t worry, we will go back and dig it all up again. The 2007 IPCC report did drop it. The one they depicted on page 457 was buried under the updated ones, which brought back the Medieval Warm Period and the Little Ice Age.  Here’s the IPCC hockey stick history. 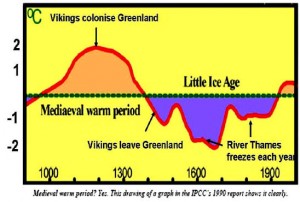 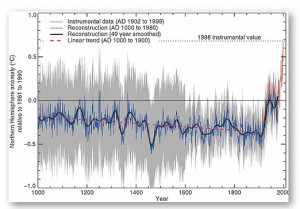 IPCC 2001 - having gotten rid of the MWP. Orwellian rewrite of history.

[Drafting the remainder of this post is in progress and will be completed as time permits (debunking volumes of errors entails a proportionate amount of time, unfortunately). -PG]