There’s been some discussion in the media about the Potsdam Institute’s (PIK) recent paper claiming that Greenland is much closer to a collapse than previously expected. 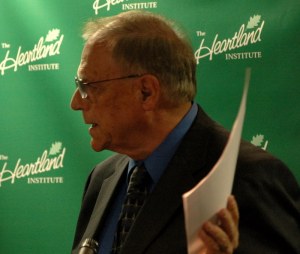 However, few scientists outside the circle of IPCC alarmists are taking the PIK claims seriously. Recall that the IPCC 5th report is pathologically desperate for climate horror stories – because the planet hasn’t warmed at all in 15 years and is now actually cooling.

Nonsense! The Greenland ice core data show that almost all of the past 10,000 years was warmer than present and the ice sheet didn’t disappear.  The ice core data show periods of warming many times more intense as recent warming without melting the ice sheet.  So much for computer modeling!  Look at real data if you want to predict real events.”

Good advice. But the problem is that real climate data don’t produce any disaster scenarios.

U.S. planes abandoned in Greenland in 1942 recovered – after being buried in 100 meters of ice!

Here’s an anecdote that illustrates how Greenland ice thickened and not thinned as the PIK would like us to believe (hat-tip to a German reader by e-mail).

According to this news report from 2008, a group of plane enthusiasts, scientists, business people and adventurists founded WoRAG (Worldwide Recoveries AG) with the mission to conduct an expedition to Greenland.

The purpose? To recover US WWII planes buried under about 100 meters of ice in eastern Greenland.

In 1942 two U.S. bombers and 6 Lockheed P-38 Lightning fighter planes were being flown to England by American pilots to join up with British forces. But the pilots had to abandon their planes over Greenland because of bad weather and low fuel. The pilots were rescued a few days later by the US Marines.

According to the above-linked report, WoRAG set off to recover 5 more planes from under 100 meters of ice (just 16 years later in 2008) – a challenge that could be met only with specially developed and produced ice melting equipment. Why not wait for the rapid global warming to melt the ice away? The report writes:

Waiting for climate change to melt the ice would take way too long.”

Now how do you suppose the planes got buried by 100 meters of ice over 70 years? Boy, that sure is some ice melt!

(And check out the Himalayas: http://theresilientearth)

9 responses to “Easterbrook To Panicky Potsdam Institute: “Look At Real Data If You Want To Predict Real Events”!”