Browse: Home / 2012 / October / 05 / German Meteorologist On Temperature Models: “So Far They Are Wrong For ALL Atmospheric Layers!”

German Meteorologist On Temperature Models: “So Far They Are Wrong For ALL Atmospheric Layers!”

Climate model trends have been providing prognoses (scenarios) for temperatures for the various atmospheric layers for about 2 decades: near the ground surface, troposphere and stratosphere.

Institutes close to the IPCC have been conveying temperature prognoses (scenarios) in the media of spectacular and supposedly dramatic warming trends for surface temperatures for about three decades. However, the atmosphere can not be simply reduced to this relatively thin lower layer, and thus it has to be taken into account as a whole.

Figure 1, above, shows the levels of the atmosphere (image source K.E. Puls).

One atmospheric interaction is that when it gets warmer in the troposphere, it gets colder in the stratosphere – and vice versa.

For this reason there are also considerations and claims by the climate models on how the temperature at various altitudes is supposed to develop according to the AGW CO2 hypothesis.

According to the climate models, global temperatures near the surface are supposed to increase about 3°C during the 21st century: “For the next two decades…a warming of 0.2°C per decade is projected” [1].

But since 1998 there’s been no trace of warming. There hasn’t been any warming in 14 years, despite steadily increasing atmospheric CO2 concentrations. Yet, this did not prevent the IPCC from making the absurd claim:

Progress in modelling…has allowed the specification of very narrow ranges of uncertainty for projected warming….”

But the most recent evaluation of the HADLEY Institute (CRU) up to July 2012 shows that precisely the opposite is true. There’s been a slight cooling over the last 14 years, what many refer to as a temperature plateau: 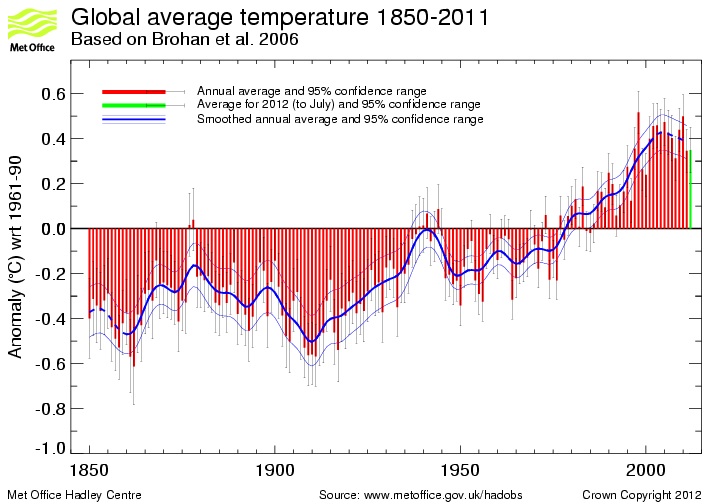 The contradiction becomes even more stark when IPCC prognoses are directly compared to measured temperatures: 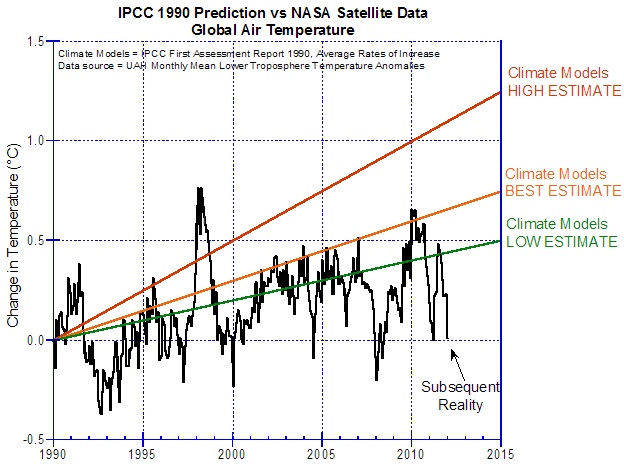 According to the climate models, the upper troposphere is supposed to show a distinct warming, a so-called “hot spot”:

But weather balloons have been unable to confirm this, and in fact show that precisely the opposite has occurred!

Figure 4, left: From data from millions of weather balloons, right: what the models predicted. Source: http://wattsupwiththat.com.

This also means that all models with a temperature prognosis over 1°C or more because of the “sure” water vapour amplification are falsified. According to the Die kalte Sonne website (www.kaltesonne.de/?p=4803):

Only a few people in the climate discussion are aware that CO2 is not the main driver, and that most of the warming is assigned to the dubious amplification mechanism. CO2 by itself only has a warming potential of 1.1°C per atmospheric concentration doubling. It is only through the theoretical assumption of the up-to-now poorly understood amplification mechanism that the warming gets catapulted by the IPCC to  2.0-4.5°C per CO2 doubling, mainly through water vapour and clouds.”

A coupling between CO2 and water vapour is at this time not detectable.”

The developments and effects of ozone, CO2, and the temperature in the stratosphere have long since been well illustrated by the German Weather Service (DWD) in one of its ozone bulletins [2]. There it is stated:

In the stratosphere…the absorption of sunlight by the plentiful ozone trace gas is the main source of heat. …Naturally the absorbed radiative energy must be given off once again. In the stratosphere this occurs…for the most part through heat radiation into space by CO2 molecules. Therefore CO2 in the atmosphere has a cooling effect, ozone a warming effect!”

And also cited there:

The actual measurements in the stratosphere between 1980 and 2008 yield completely different results, and are shown in in Figure 5: 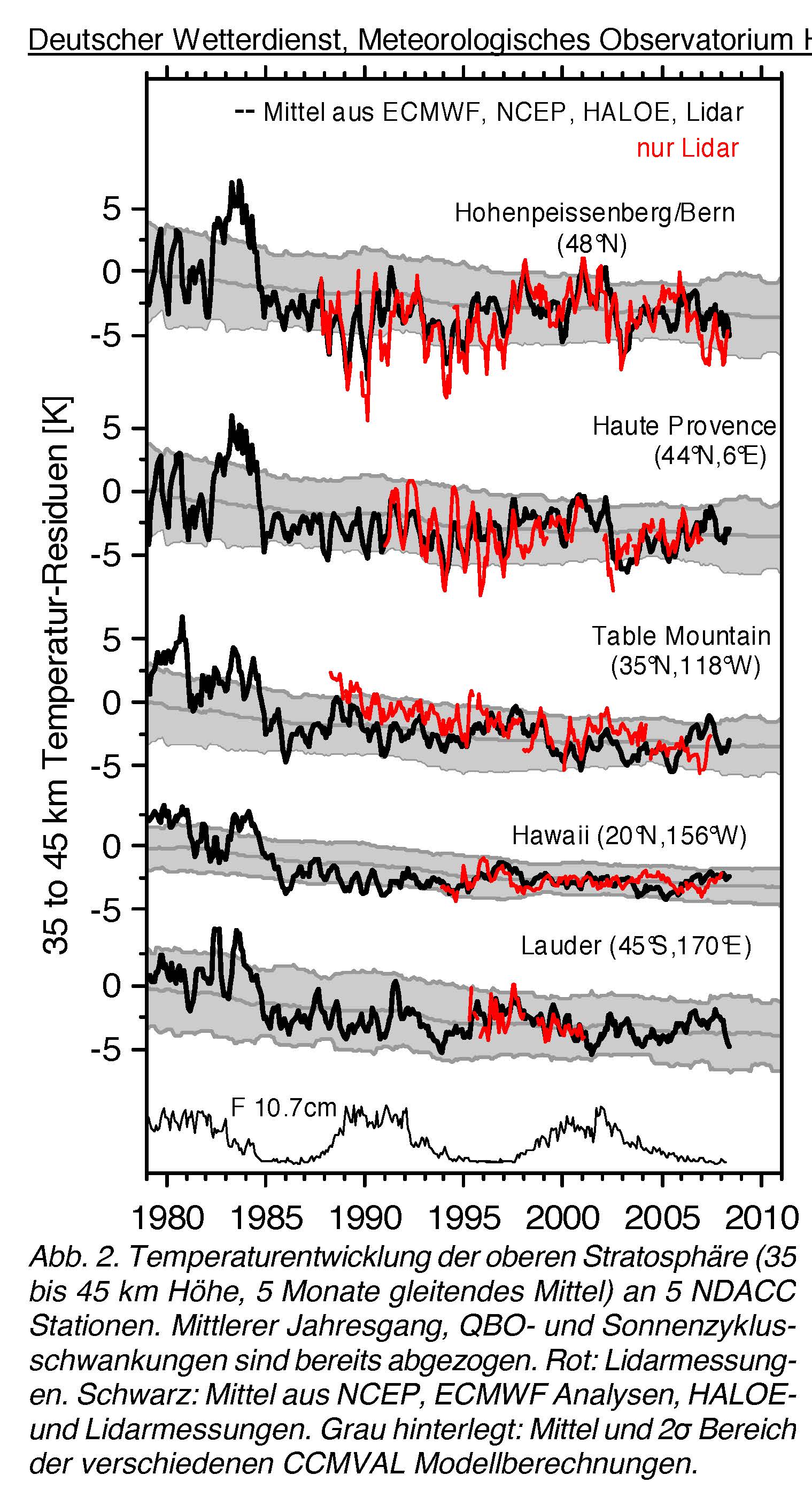 While the models show a steady and gradual cooling, the measurements at all stations show an entirely different development: A cooling was indeed the case until the end of the 1980s. Over the last 20 years all the temperatures at practically all the stations have remained more or less steady (exception data from Table-Mountain Lidars).”

According to Figure 5) The DWD writes:

…the gradual cooling of the upper stratosphere computed by the models did not occur over the last 20 years…. Therefore there had to have been changes that have compensated for the expected cooling since 1985, and which were not reproduced by the models.”

The projected temperature changes forecast by the climate models for the various layers of the atmosphere are all wrong!

9 responses to “German Meteorologist On Temperature Models: “So Far They Are Wrong For ALL Atmospheric Layers!””