Share this… Facebook TwitterI like checking the temperatures in Siberia using the map at Joe Bastardi’s Weatherbell. Today I found a real extreme reading. Eastern Siberia, -61°F, see center. Source: www.weatherbell.com/. Now we know it’s been pretty damn cold in Eastern Europe and all over Russia, but this is getting ridiculous. This has been going […]

Share this… Facebook TwitterIt’s the worst cold snap in Russia in over 70 years. Hundreds have already frozen to death across Eastern Europe. But you won’t be hearing about this in the mainstream media. More deadly cold is forecast for Eastern Europe. Source: wxmaps.org/pix/temp4.html (12/20). The political velcraft.org site reports: The spate of cold weather that […]

Share this… Facebook TwitterEver wonder why IPCC scientists are losing credibility? Rudolf Kipp in a reader comment here points out an interesting claim being made by the IPCC 5 AR Summary for Policymakers (SPM) on page 10. It states: The greenhouse gas contribution to the warming from 1951–2010 is in the range between 0.6 and 1.4°C. […]

Share this… Facebook TwitterThis week’s print edition of FOCUS includes an interview with the producer of a new environmental film to be shown in German cinemas beginning in January: Climate Crimes – Environmental crimes in the name of climate protection. It will premiere soon in Vienna. Here’s the trailer (in German): The pictures tell the […] 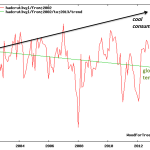 Share this… Facebook TwitterThe International Energy Agency (IEA) has issued a press release on global coal consumption. Many claim that last decade’s rapidly rising coal consumption is causing global warming. I beg your pardon:  While coal consumption has “risen rapidly” over the last decade, the linear global temperature trend has dropped at a rate of 0.7°C/century! Source: […]

Share this… Facebook TwitterA new, damning study published by the Cologne Institute For German Economics confirms what critics of renewable energy feed-in acts have been saying, and quite loudly, all along for years: The poor are getting screwed and the rich are benefiting. Redistribution from bottom to top. The cost in euro-cents per kw-hr that […] 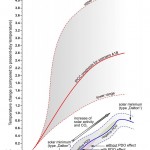 Share this… Facebook TwitterCommunism and all forms of tyranny are incurable cancers. All you can do is hope to put them into remission, and the longer the better. But they always come back. Altmaier’s latest climate-saving campaign: “Put the lid on your electricity consumption.” Source: www.bmu.dep Now that cancer is threatening to return to Germany – […]

Share this… Facebook TwitterThe UN has been holding climate conferences in a bid to curb man-made CO2 emissions for 20 years. However CO2 emissions are incresaing at record reates as China, India and an array of third world countries finally develop and begin to vanquish grinding poverty in earnest. That UN effort has failed completely […]

Share this… Facebook TwitterGrowing Antarctic ice is actually shrinking. That’s what a study by the Potsdam Institute for Climate Impact Research (PIK) is claiming in a new paper published by Nature. This is precisely in line with the global warming logic that a warmer globe leads to colder, snowier winters. The peer reviewers at Nature simply have no […]

Share this… Facebook TwitterThe ongoing bitter cold snap and snow, dubbed the “Beast from the East”, have been wreaking havoc in Europe and claiming hundreds of lives. According to the UK online The Sun, the winter wave is “killing 270 people a day” – in Britain alone! Chief Medical Officer Professor Dame Sally Davies of Britain’s Department […]