Over the last few days, parts of Germany have been hit by some of the worst flooding seen in 100 years after heavy rains hit southern and eastern regions over a period of 4 days. Since then armies of climate charlatans have appeared in the media claiming it’s all because of man’s fossil sins.

Today the German Weather Service (DWD) issued a press release. I’ll remind readers that the DWD is now under the control of warmist activists, who have far more faith in crystal ball fortune-telling models than they do in real observations. Here are some excerpts of the DWD press release:

After the extreme precipitation of the last days, especially in southern and eastern Germany, and the subsequent devastating flooding situation, citizens are asking two questions: How often can something like this happen, and do we have to expect such extreme events more often in the future because of climate change? What follows are some explanations by the German Weather Service (DWD).”

The DWD then explains that flooding in general is nothing really unusual, but that this time the extreme flooding was due to a large weather system and the 4 days of heavy precipitation it brought with it. Some 22.75 billion metric tonnes of water fell onto Germany. That’s 22.75 cubic kilometers! Moreover, the ground had been already saturated from of a wet month of May and, to make things worse, snowmelt in the Alps added to the water mass. In summary a number of factors happened to converge.

The question of course is: Did this happen because of climate change? The DWD writes (my emphasis):

Analyses by the DWD over the period of 1951 to 2000 show no distinct trend of more extreme precipitation events can be derived. However there is a trend to more precipitation days with 30 liters and more per square meter – especially in the winter. Global warming shows an increase, which means more water vapor in the atmosphere. The latest climate analyses and projections show a tendency to more wet low pressure systems over Central Europe. The median annual number increases 20% accordingly from 1951 until the end of the century.”

As they added the word “projections” we can assume here they mean the end of the 21st century. Note how sloppy (tricky) they are with the communication by blurring the past and the future. If you read carefully, they seem to be saying no trend from 1951 to 2000, yet their projections show 20% increase by 2100, leading a reader tio believe that there is an overall upward trend. If a reader doesn’t read carefully, then he may easily get the idea that there is a “20% trend” The reality however is: their real observations show no trend, but their crystal balls foretell a 20% increase by 2100.

Should we believe the DWD crystal balls? Like Richard Feynman said: “If the observations don’t match your guess, then your guess is wrong. That’s all there is to it.” It doesn’t matter how many awards you got, how renowned the newspapers say you are, or if you think you won a Nobel Prize, or if your are the director of the Weather Service – it’s wrong.

As a final note, Dr. Roy Spencer shows us just how well 73 climate climate models are doing so far: 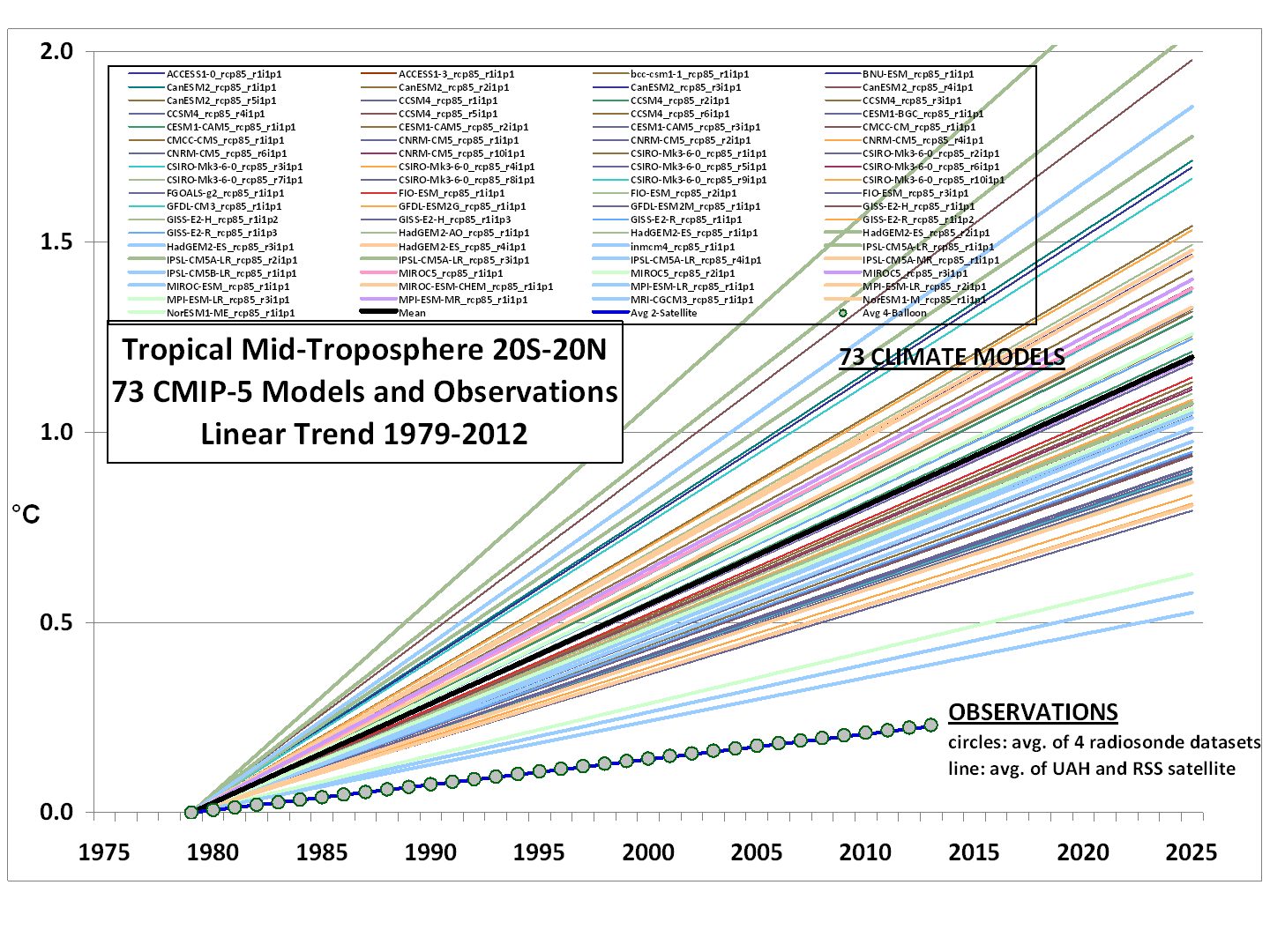 “If the guess doesn’t match the observations, then it’s wrong”. Chart source: www.drroyspencer.com/.