Originally the flagship North Sea wind energy project was scheduled to be delivering clean energy by August 2013. However technical failures beleaguered the project and delayed the opening 7 months: until March 2014. 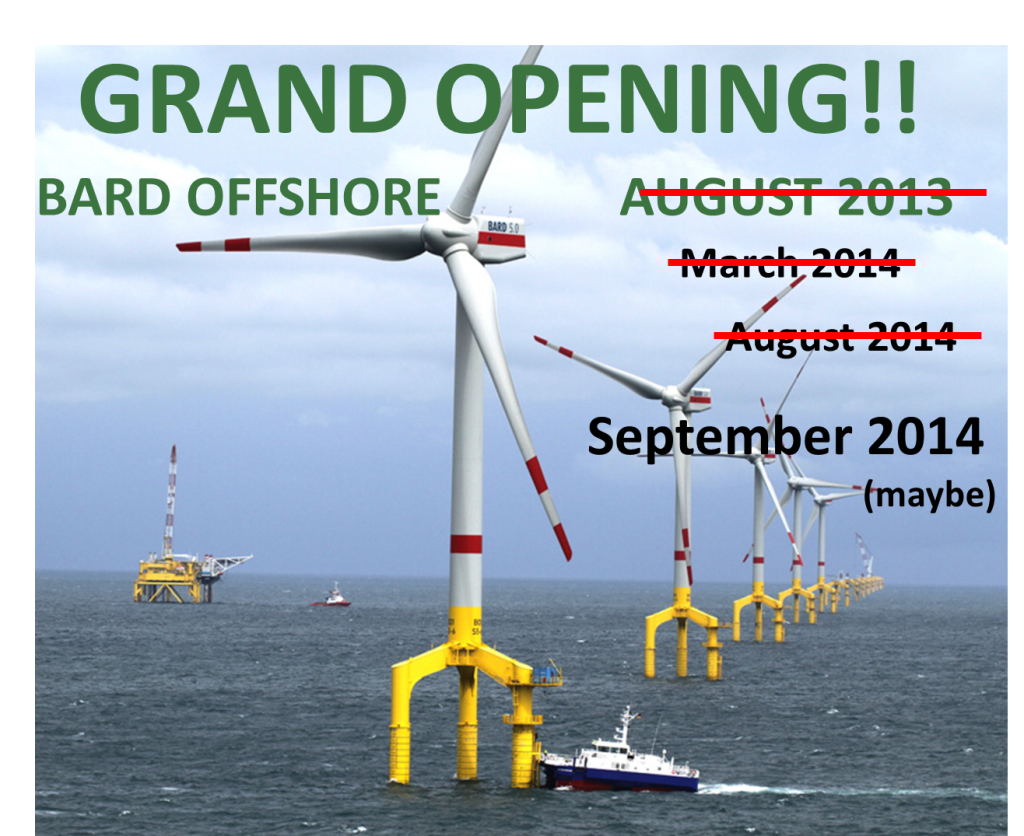 BARD I offshore windpark shut-down extends 9 months. Builders have been unable to resolve technical faults plaguing the project from the start. Text added to photo by NTZ. Original photo: BARD.

But March came and passed, and again the technical problems persisisted and engineers were forced to delay the opening until August 2014, background here.

But that deadline too has now passed and the Austrian Der Standard here reports that the 400 MW BARD I offshore wind park shut-down will be extended at least another month as engineers struggle to get the park online by the end of September.

According to Der Standard: “Problems with over-voltages in the cable network plagued and ultimately led to a switch-off. The troubleshooting was supposed to be completed in August, however no exact analysis has yet to be produced.”

Hope to repair problems this month

A consortium of companies have been feverishly searching for the root cause of the network problems, but Der Standard writes that the reas0n for the faults is still unclear and that fluctuations in the grid “overloaded a filter” at the Tennet-operated Borwin 1 transformer station. “The repairs should be finished by the end of September.”

Here we are assuming they mean the year 2014. BARD 1 has not issued any press releases or provided comment on the new delays.

Delay costs up to 2 million euros a day!

The Bard 1 North Sea wind park consists of 80 units 5 MW turbines and is located offshore 100 km from the north German coast. The extended shut down will mean a further financial blow to the project, with cost overruns reported to be already well in the double digit millions of euros. Alarmist site klimaretter here writes of the shutdown.

The estimated costs run between one and two million euros per day.”

But in the end, everyone knows who is going to end up footing the bill. Germany already has among the highest electricity costs in the world. Germans will have to prepare to pay even more, and soon!