The polar-vortex-inducing “warming Arctic” seems to be doing strange things to the Arctic itself – defying the very laws of physics: The “warmth” there is causing the sea ice extent to explode. Compare 2012 versus 2014: 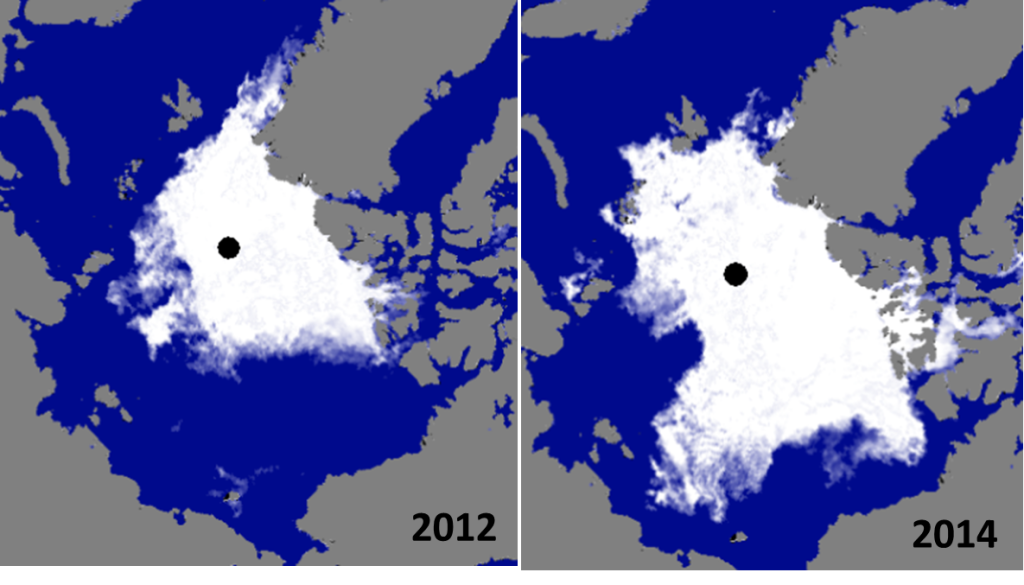 Depending on which dataset you use, the Arctic sea ice extent this year is about 1.8 million sq km more than it was at the same time in 2012. That’s equivalent to over 20,000 Manhattans.

Applying in reverse the theory that a warm ice-less Arctic produces bitter cold northern hemispheric winters though Rossby wave perturbations, we should expect that the recently added Arctic sea ice will now lead to warmer winters.

Of course that would be in stark contradiction to what was observed in the late 1970s. Back then we saw extensive Arctic sea ice cover, yet bitter northern hemispheric winters were generally the rule. Predictions of an impending ice age were issued. Today the global warming alarmist scientists wish we would just forget all that.

The notion that a warm Arctic causes frigid winters in Florida is a half-baked Hail-Mary hypothesis at best. It’s designed to buy a little bit of time.

A few days ago I wrote here how some Western European countries had seen a cold August, with mountain areas even getting the first licks of winter. Now Switzerland has just released its August data. The online 20min.ch site here writes that the Alpine country’s August was 1.5°C below the long-term mean. The 20min.ch writes:

‘In August a clear deviation with respect to the temperature value was observed,’ says meteorologist Sarina Scheidegger of Meteonews. ‘Only in Sitten did the deviation stay below 1°C. In the rest of Switzerland it was at least 1.5°C too cold.'”