Based on GISS data

Even though IPCC climate models and expected climate trends have proven themselves to be completely false and useless, see here and here, parts of the Austrian media and state sector have no qualms using them, and in doing so they are misleading the public.

The whole premise of the story is based on the climate models being right, which in fact today we know they have been universally wrong.

Palm trees in Vienna in a few decades!

In the article written by Christa Minkin and Julia Schilly, it is claimed that palm trees are to be expected in “a few decades in the Viennese forest – thanks to climate change,” citing ecologist Franz Essl of the Austrian Federal Ministry of Environment.

Minkin and Schilly also warn that Vienna is going to be hot in the future, all exacerbated by the urban heat island effect, citing “a new Austrian expert report on climate change“.

Der Standard also looks very deeply into the climate crystal ball…all the way to the year 2070 to 2100. Minkin and Schilly write:

For the period of 2070 to 2100 researchers anticipate a rise to more than 35 heat days per year on average. At the same time nights in Vienna will cool down less.”

Moreover, foreign plants will begin their invasion and displace domestic ones, the experts warn.

Slight cooling over the last 16 years

So with all the warnings of more unbearable heat days in the future, one might assume that temperatures in Austria must be currently on the rise. I searched the Internet for the temperature data series for Vienna, but unfortunately I wasn’t successful finding it. So I contacted the European Institute for Climate and Energy to see if they might be able to help out. They answered promptly by e-mail (slightly paraphrased):

Unfortunately we do not have the more recent data because the Austrian Weather Service does not make them public, only up to 2003. That’s why it’s not possible to show the last 15 years graphically, and so climatologists in Austria can claim whatever they want.”

Fortunately, EIKE was able to provide the recent data for Graz city center. Here we see despite the urban location there’s been a slight cooling. 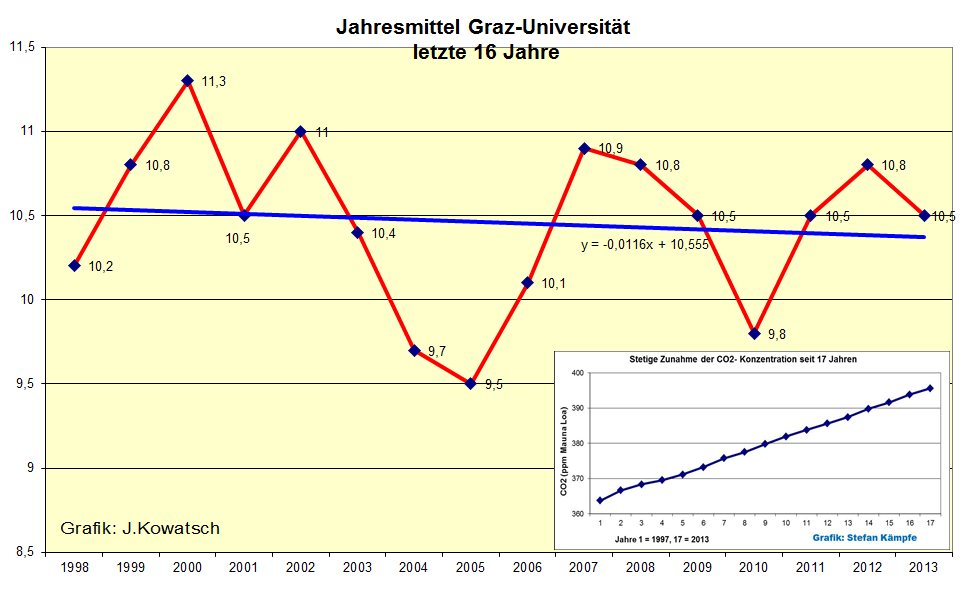 The trend in Graz matches the overall trend of a slight cooling over central Europe over the last two decades.

So with the IPCC models having performed so horrendously, and in view of the fact there has been no warming trend in Austria for 16 years, it is truly a mystery how anyone could claim that summer heat days will just keep on rising linearly until the end of the century.

When the models are failures, then the future projections based on them are worthless.