The data on this year’s meteorological summer (June-July-August) are coming in and they tell us trouble is brewing at the high latitudes. I reported here on this earlier.

First, fresh data from Ireland show that the country had one of the coldest summers in living memory, despite near average sunshine. The Irish News here reports:

Armagh Observatory, which has been recording the weather in the city since 1795, found that June, July and August had an average temperature of just over 14 degrees – slightly colder than the bad summers of 2011 and 1993 and the coldest since 1986.”

So what’s going on? We see using NOAA data how northern Quebec, Greenland, the North Atlantic, Britain, Scandinavia and across a vast part of Northern Russia temperatures were markedly cooler than normal this past summer: 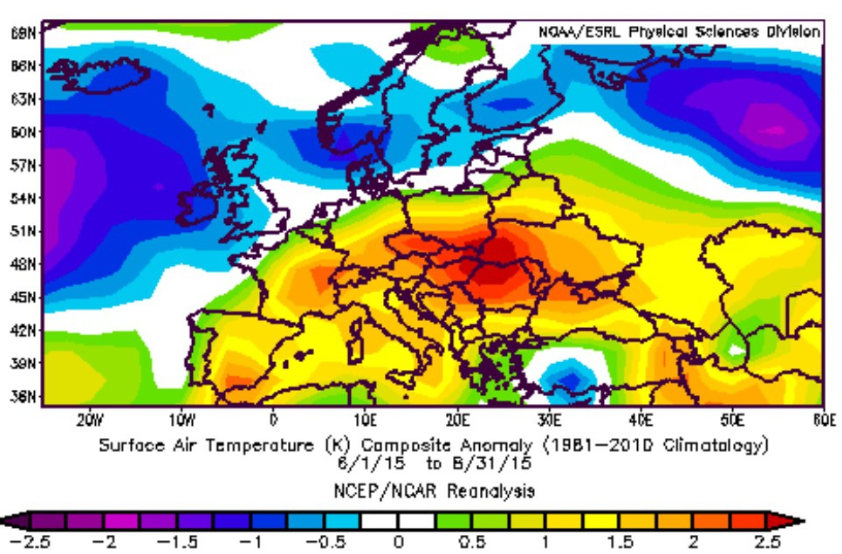 The rapidly cooling North Atlantic  and a large switch f the Arctic bodes very ill for the globe, especially in view of the fact that it will combine with the expected upcoming La Nina on the heels of the current El Nino, and therefore we may see global temperatures plummeting by up to half a degree in a about 2 years time.

Another ominous sign is Greenland has seen its massive ice sheet grow by 220 km³. This is enough to cover the entire country of Spain with half a meter of ice.

Already forecasts of horror-winters are appearing for northern Europe, and they will come true should the mass of cold stick around. Caution with such forecasts are advised, of course.

The overall North Atlantic cooling development already appears to have some warmists in a state of panic, and so it’s no surprise we are now seeing highly dubious studies insisting that the warming is causing the cooling.

Thanks to the oceanic ENSO cycles this year globally as a whole the planet has been warmer than normal. However the equatorial regions of the globe are not really the locations that alarmists customarily showcase as the ones to watch, especially in view of the fact that weather balloons have failed to show any warming up in the lower troposphere, precisely where the theory claims this is where you’d expect it.

Both poles no longer cooperating

Over the better part of the last decade the warmists liked using the high latitude Arctic regions as the “canary in the coal mine”. They also used to showcase Antarctica as well, but the South Pole stopped cooperating with melting scenarios years ago, and now so has the Arctic stopped cooperating.

Scientists are now acknowledging that a return of Arctic sea ice is entirely possible. There’s real trouble brewing for the warmists.