Not only should we be concerned about the overall cooling that is now in the works for the globe, as we reported here, but for those of us in Central Europe we can now forget about getting out the sundry summer items for at least another week.

The frost on my car’s windshield yesterday morning here in the north German lowlands was a sign of what lies ahead.

The forecast for Central Europe shows the month of April getting sharply colder, rather than warmer like it’s supposed to. The latest forecast even sees snow down in the north German flatlands next Monday.

At Weatherbell Analytics, the forecast snow was impressive enough for veteran meteorologist Joe Bastardi to mention it yesterday in his daily weather video. Joe put up an NCEP chart depicting the temperature anomaly for the coming days ahead for Europe and also warned of possible snowfall for Germany: 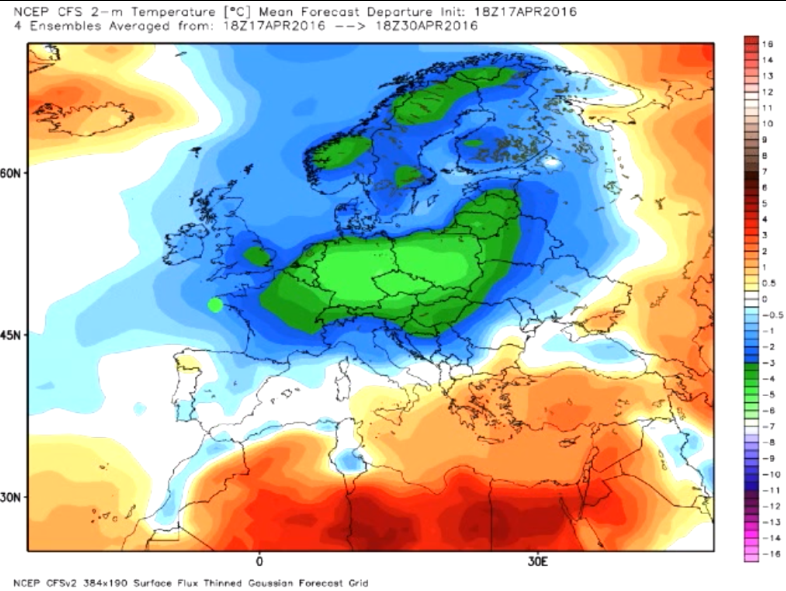 Though temperatures that are 6°C below normal are not really so unusual, what is unusual is the forecast for snow for this time of year. Recall how top climatologists, e.g. David Viner and Mojib Latif, told us 15 years ago snow would disappear even in the wintertime – never mind late April.

Great Britain has already gotten a taste of the white stuff and cold that is about to hit the remainder of Europe.

Little wonder climatologists have had to scramble and think up of new reasons to explain the inconvenient cold events and the overall warming pause. Many of these reasons have been nothing new, and have been in fact long well-known. Like the Rossby Waves, for example.

Though they ignore the many studies showing weather extremes have not increased, the ultra-alarmist Potsdam Institute for Climate Impact Research (PIK) has produced a video explaining the Rossby Waves, which I think is very useful.

But as is always the case with the PIK, one has to be careful when discerning fact from theory, or just plain alarmist fantasy, in the information they put out. The general rule for the PIK is: If it’s alarmist, then it’s science. If it’s not alarmist, then they ignore it or downplay it.

Also note how in his daily video Joe Bastardi reminds us that the “permanent drought” forecasts for Texas recently made by “climate experts” have suddenly and already crumbled as the region gets doused by heavy rainfall. Yet another alarmist scenario that has turned out to be totally bogus.