No doubt today there’s a huge demand for science de-indoctrination – especially among children – in a variety of fields, ranging from nutrition, climate science, economics and even eugenics (still!).

Government corruption of the sciences is as old as civilization itself. It will never go away and so the best we can hope for is to keep fighting it as best we can. The most powerful and most feared weapon of course is the truth.

Professional zoologist and polar bear expert Dr. Susan Crockford’s book for children, Polar Bears – Facts and Myths, makes a valuable contribution to this effort. For almost a decade the polar bear has been used by climate alarmists as the poster child for spreading fear over a melting Arctic and species extinction.

Although the book is targeted at children age 7 to 10, many adults and political leaders could also learn a lot and profit from it. 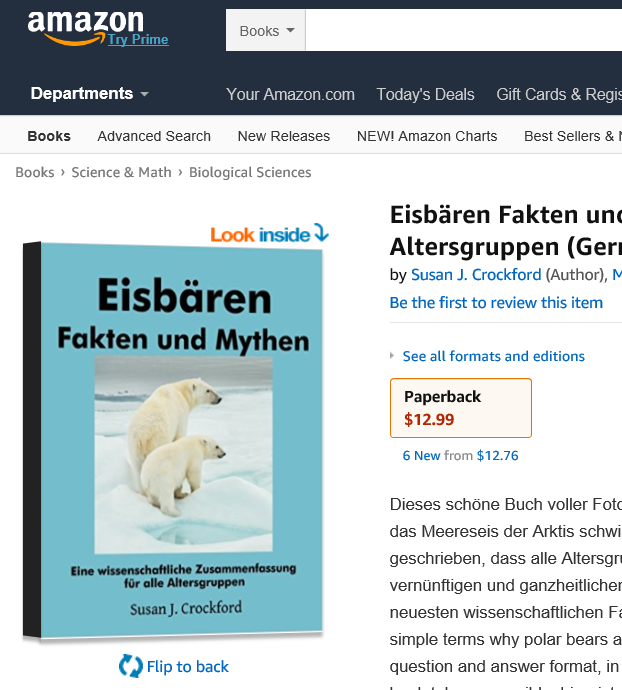 Facts only, “without appeal to emotion”

The book is a real eye-opener as it dispels 8 common myths surrounding polar bears. Little wonder the book is a real threat to the junk-science purveyors and indoctrinators at our nations’ schools. The book will certainly encourage children to think critically and to question some of the science orthodoxy we see in climate. The parents of kids who bring this book to school should not be surprised if they get a letter from administrators.

What compelled Crockford to write this children’s book? The Canadian zoologist had seen more politicization of polar bear science than she could take, she wrote in an e-mail. Over the last two years Crockford has given talks about polar bears to many school children. “The kids and their teachers have all been astonished to learn how many polar bears still exist in the world as of 2015: they have all been led to believe that perhaps only a few hundred bears now survive,” Crockford said.

“I felt it was important to produce a book for this age group, and their teachers and parents, that presents the science about polar bears and declining Arctic sea ice without an appeal to emotion,” she wrote.

The book has since been translated into the French and the German and is readily available at Amazon. With the Christmas season approaching, what better present to give a child or global warming alarmist?

Susan Crockford is a professional zoologist who has studied polar bear ecology and evolution for more than 20 years. She also runs the blog about polar bears called www.polarbearscience.com.