In 2015, Climate Scientists Wrecked Their Own CO2-Forced ‘Polar Amplification’ Narrative

CO2 emissions exert no detectable effect on Arctic, Antarctic temperatures. The Arctic region is no warmer in recent decades than it was some 80 years ago, or before CO2 emissions began rising significantly. 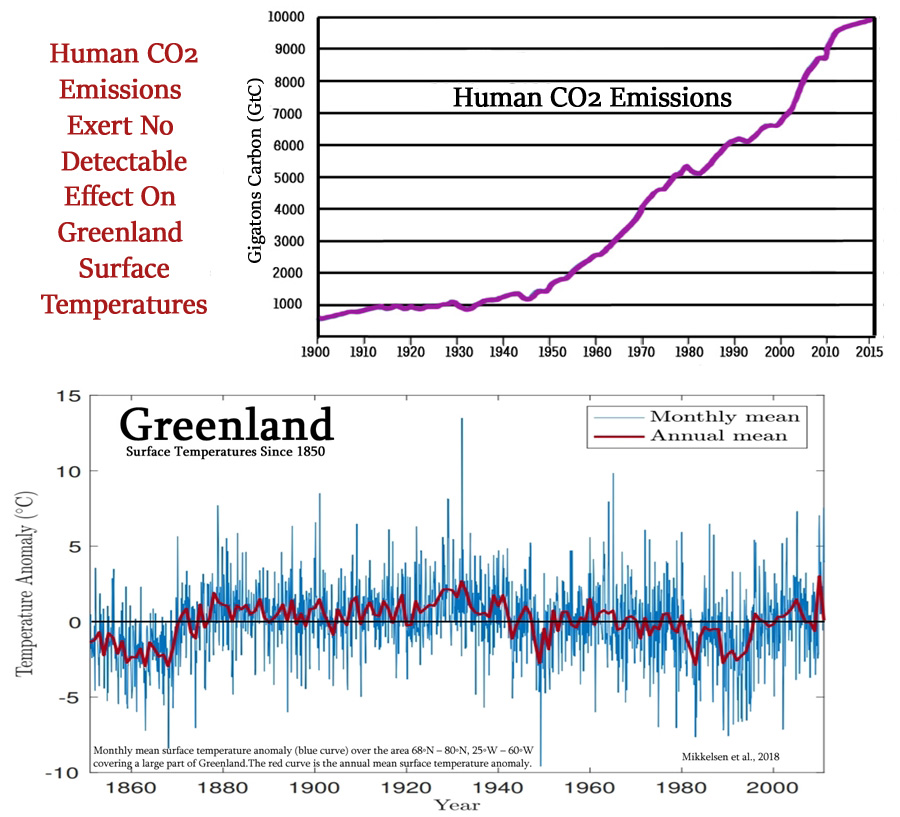 According to the IPCC, the Arctic and Antarctic regions warm more than the rest of the globe — a phenomenon branded as polar amplification.

Further, it is conclusively stated (with “high confidence”) that this enhanced polar warming occurs largely in response to increases in atmospheric CO2 concentration.

Although obligatorily insisting their research did not undermine the main tenets of anthropogenic global warming (AGW) theory at one turn, the authors nonetheless landed a devastating blow to the conceptualization of a CO2-amplified polar climate – and thus to the narrative that says the ice sheets and sea ice are melting primarily due to increases in anthropogenic CO2 emissions.

Schmithüsen and colleagues reached the conclusion that CO2-forcing is “rather small” and even “weak“ at the poles.  They found the planet’s tiniest warming signal from CO2 occurs for central Antarctica; they characterized the CO2-forcing for the Arctic region as “comparatively weak”.    For example, quadrupling CO2 concentrations over the Antarctic Plateau is poised to yield a net radiative forcing value of just 1 W m-2.

The authors even assert that increasing CO2 concentrations causes atmospheric cooling in some areas above the Antarctic continent.  They characterize this as a “negative greenhouse effect” due to the “increased long-wave energy loss to space, which cools the Earth-atmosphere system”.

Key points from the paper are highlighted below. 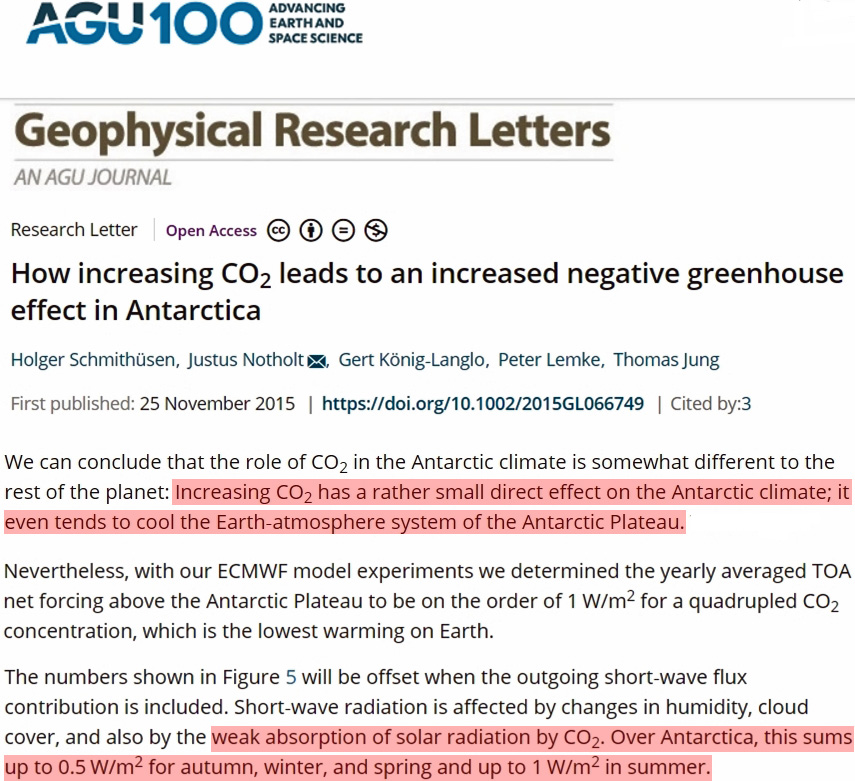 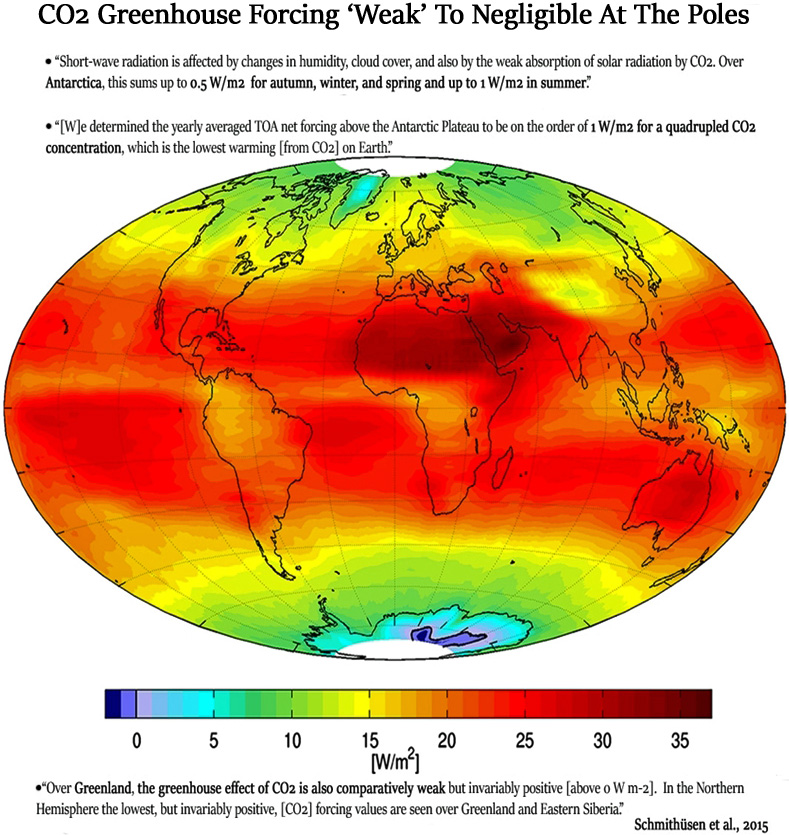 Warming From Increased CO2 Is ‘Comparatively Weak‘ For The Arctic Region

‘Polar Amplification’ From Increased CO2 Not Detectable For Antarctica

Consistent with the conceptualization that “polar amplification” from increasing human CO2 emissions has gone unrealized, the temperature records for the Antarctic continent do not suggest warming has occurred in recent decades. 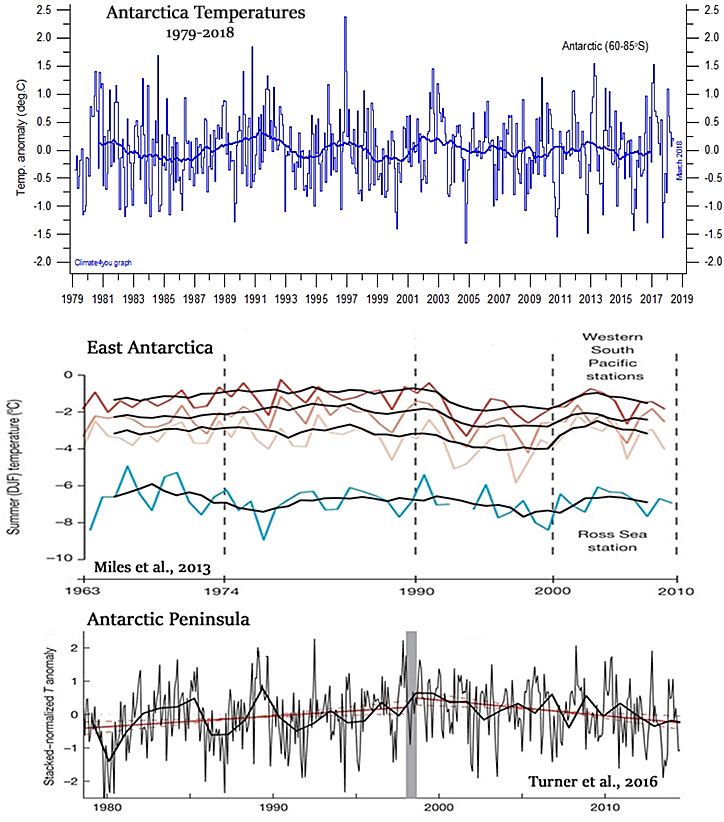 Consistent with the conceptualization that “polar amplification” from increasing CO2 has gone unrealized, the temperature records for the Arctic region also do not suggest a discernible net warming has occurred in response to the rapid increase in anthropogenic CO2 emissions since the mid-1940s.  The Arctic region is no warmer in recent decades than it was ~80 years ago, or before CO2 emissions began rising significantly.  This would support the conclusion that CO2 emissions increases have exerted no detectable effect on the Arctic region’s temperatures. 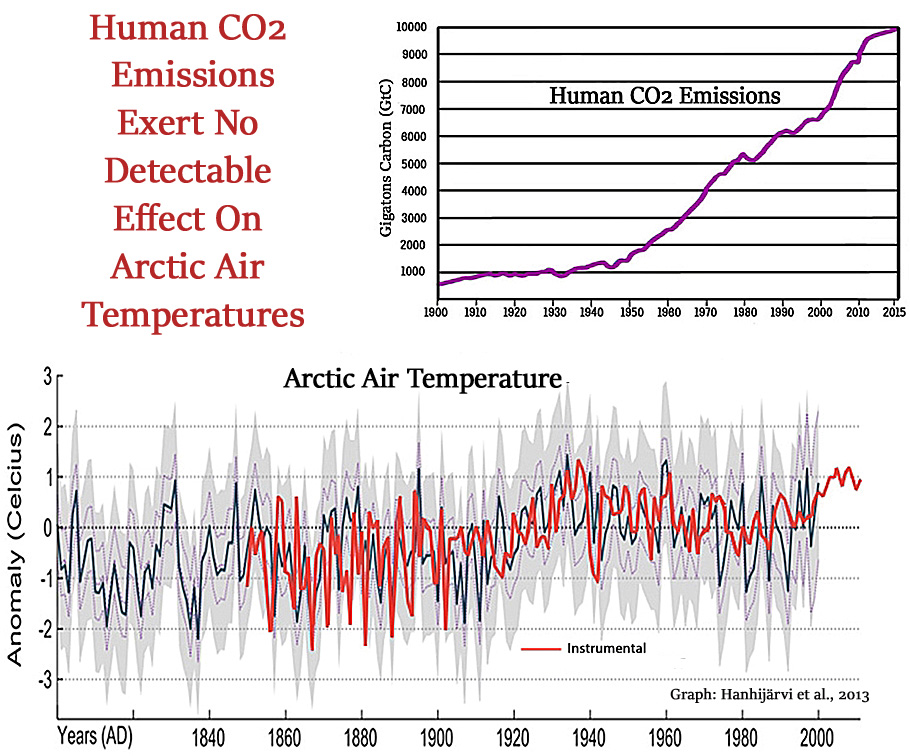 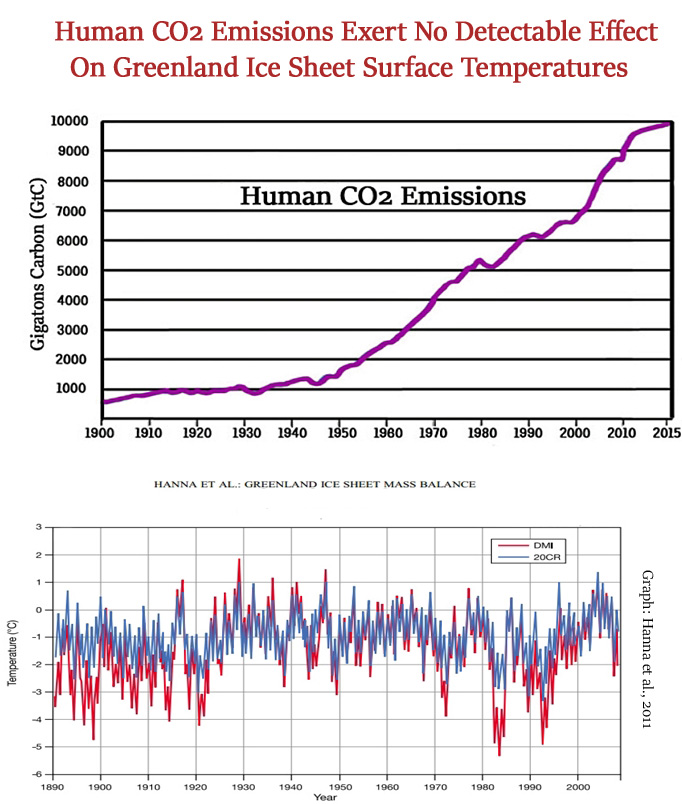 If the warming effect from increasing CO2 concentrations is only “weak” to negligible for both the Antarctic and Arctic regions, then the justification to endorse the most alarming tenets of the anthropogenic global warming conceptualization may be thoroughly undermined.

1. The decline in Arctic sea ice since the late 1970s may no longer be predominantly attributed to CO2-induced Arctic warming.

2. Mass ice losses for both the Antarctic and Greenland ice sheets in the modern era may no longer be predominantly attributed to CO2-induced polar warming.

3. The net ice melt contribution to sea level rise from the Antarctic and Greenland ice sheets in the modern era may no longer be predominantly attributed to CO2-induced polar warming.

4. The post-1980s temperature warming for the Arctic region (that has significantly affected the overall global warming trend) may no longer be predominantly attributed to CO2-induced Arctic warming.

Update: A just-published paper, Flanner et al., 2018, cites the negative CO2 greenhouse effect conceptualization introduced by Schmithüsen et al.,(2015).  At no time do the authors challenge the relatively quite weak radiative forcing values (~1 W m-2) for the CO2 greenhouse effect in the polar regions as depicted in the colorized graph above.  Instead of challenging these very small CO2-forcing values for polar regions, the authors only challenge the less consequential concept of whether or not a cooling would occur at the poles in response to increases in greenhouse gases (GHGs) in general, and not CO2 in particular.   It would appear the weak CO2 forcing (W m-2) values for the polar regions as determined by Schmithüsen et al., (2015) are accepted by mainstream climate science.

137 responses to “In 2015, Climate Scientists Wrecked Their Own CO2-Forced ‘Polar Amplification’ Narrative”