Using a comparison, Japanese skeptic blogger Kirye at KiryeNet drives home how “the real Arctic sea ice volume is much higher than in 2008.”

Using images and data from the Danish Meteorological Institute (DMI), Kirye put together and posted a comparator showing the immense March/early April sea ice volume increase the Arctic has seen since 2008. It totally defies the panicky claims of a “melting” Arctic, she tweeted.

You can see the animation comparator Kirye put together in action here at Twitter. 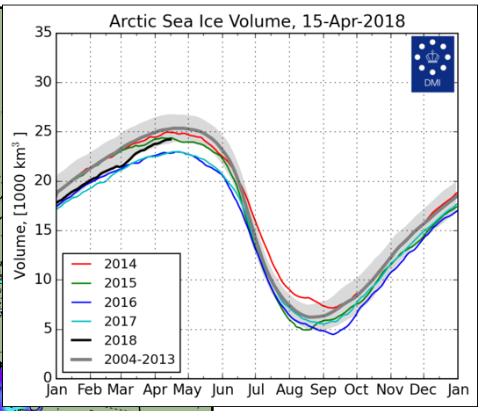 Kirye comments that although we have not once seen alarmists’ climate predictions come true, they continue to threaten us with sea ice doom.

Yesterday Anthony Watts posted here on the Arctic, remarking that the media claims of earlier this year of an unprecedented Arctic warmth had much more to do with hyperbole than with reality. Lately the Arctic has been a generous source of fake news from the global mainstream media giants, all claiming something that is not real, or making something that’s happened many times before look “unprecedented”.

Back in January, 2016, I wrote here how “the Washington Post screamed bloody murder that the North Pole was in meltdown as temperatures at that singular location rose some “50 degrees above normal”, making it sound like this event had been an unprecedented phenomenon.

For that post I had gone back and examined DMI data Arctic temperatures above 80°N latitude going back some 58 years. Here’s what I found:

And examining all the years since 1958 we see that a temperature spike of some 12°K or more in a matter of a few days (during the November to March deep winter period) occurred more than 70 times! And over 100 times for spikes of 10°K and more.”