I’ve been regularly bringing you climate and energy news from Germany, with Kenneth in USA posting on the latest science.

Now NoTricksZone is happy to report we are also working with skeptic Japanese climate blogger Kirye, who runs KiryeNet. This means we’ll also be occasionally presenting skeptic news out of Japan in English.

For example in last Tuesday’s post Kirye delivered the key parts on the Arctic Freezamageddon. Our aim is to provide more of such posts in the future.

Views from other countries like Japan are always extremely useful. There really isn’t any global climate science consensus. It’s fraudulent to claim that there is. 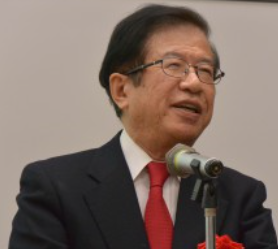 Last year KiryeNet here reported on prominent Japanese scientist Dr. Takeda Kunihiko (image right) making an appearance on a popular entertainment/information TV show, where he presented another view on climate change before a national audience. He called manmade global warming was “a hoax”.

Just over a year ago on a popular TV program called ‘HONMADEKKA!? TV’ that was broadcast on January 4, 2017, Chubu University Professor Kunihiko Takeda told the audience: “In 2017 finally it will be exposed that global warming is a hoax.”

The show also reported that “CO2 in the early times of the Earth was 95%; now it’s 0.04%”. The discussion round took place between Dr. Takeda, actress Kiriko Isono, comedians Kosugi, and Yoshida, and host Sanma Akashiya. What follows is the English transcript of the pertinent segment:

Dr. Takeda:
“At last it will be exposed that global warming is a hoax in 2017. A skeptical person who is critical of the EPA will become the new administrator of the EPA. That is scheduled. Therefore, that is for sure.”

Kosugi:
“I think I heard that the Antarctica and the Arctic are melting.”

Sanma Akashiya (the host):
“The earth has a good balance.”

Yoshida:
“Really? Even if the total of the ice in the Arctic and the Antarctic remains unchanged from the past, it is over when one of the poles become ice-free, right?”

Dr. Takeda:
“No, no. Originally, by reason of the distance with the sun, it is normal that there is no ice on the earth. Though as you know that there is the so-called the ice age. The ice age is when there is snow which cannot melt even in summer. So we are in an ice age now.”

Sanma Akashiya (host):
“Do you think that the water will flood (when the Arctic becomes ice-free)?”

Sanma Akashiya (the host):
“Hey you, when the ice in the glass has melted, does the water overflow?”

Dr. Takeda:
“Mr. Sanma Akashiya and I remember studying the principles of Archimedes during the junior high school days. He and I are right.”

And Dr. Takeda once commented:

CO2 emissions make absolutely no difference, one way or another… Every scientists says this, but it doesn’t pay to say so…Global warming as a political vehicle, keeps Europeans in the driver’s seat and developing nations walking barefoot.”

Clearly there is no consensus when it comes to climate science. Consensus is not formed by dismissing those who dissent.