In March our supplier of energy was more inactive than in the previous months. The sunspot number was only 2,5, which is only 8% of what is normal for this month into the average cycle (month 112).

A sunspot was detected only on 6 of 31 days. An observation made on April 10, 2018, allowed us to say that at approximately 30° southern heliospheric latitude the SDO solar research satellite saw a tiny spot (it was too small to be officially counted as a sunspot) that certainly belonged to the next approaching solar cycle no. 25.

Sunspots are magnetic phenomena. The thermally conveyed plasma at the sun’s outer layer generates electric currents. Each of these currents produces a magnetic field. Depending on the direction of the current, the magnetic field is polarized and changes on the sun with each change of cycle.

The SDO instrument is able to determine the polarity of the magnetic field for each sunspot, and provided this image: Figure 2: A magnetic image of the sun with the tiny spot showing the magnetic field polarity of solar cycle no. 25. Source. All spots of the still ongoing solar cycle no. 24 have opposite polarity: white section to the right and black to the left. The colors of the tiny cycle 25 spots are reversed.

Certainly not. And solar cycle 25 has yet to begin as more spots with the same SC 24 signature are still  in the pipeline. Moreover solar cycle 24 could resemble the end of solar cycle 5, see Figure 1. In the months during a minimum, spots can appear that belong to the next cycle, as there is a transition phase where spots of both cycles appear.

The solar minimum has started

It can still take quite some time before the next cycle makes its debut. Whether the current solar cycle turns out to be both an especially weak one and a short one is still unknown. Historically weak solar cycles have lasted longer than strong ones, It is difficult to say if solar cycle 24 will be an exception. We’ll keep you up-to-date!

Next is a comparison of the deviation from the mean (112 months into the cycle) of all the solar cycles recorded thus far since the 18th century: Figure 3: Comparison of the previous 24 solar cycles recorded since the 18th century. The current solar cycle no. 24 is the weakest in almost 200 years. Only two other cycles were weaker.

For estimating the strength of the upcoming cycle 25, we regularly cast a look at the sun’s polar fields. The current data are suggesting that solar cycle 25 will be similar to the current solar cycle 24. Thus we have to anticipate that the solar activity will not be retuning to normal levels until at least 2031 – the year solar cycle 25 should end.

The good news is that it is highly improbable the sun will enter a Grand Minimum, such as the one that occurred from 1645 – 1715, the period known as the Little Ice Age.

Now it’s sure: solar cycle 24 will go down as the weakest in close to 200 years. Thus all the news of massive snow and ice this winter over the northern hemisphere don’t come as a surprise for many scientists.

Arctic sea ice has in fact stabilized over the past 10 years. For example Japanese skeptic blogger Kirye of KiryeNet tweeted here: “From the standpoint of Arctic sea ice volume, the melt season hasn’t started yet.” 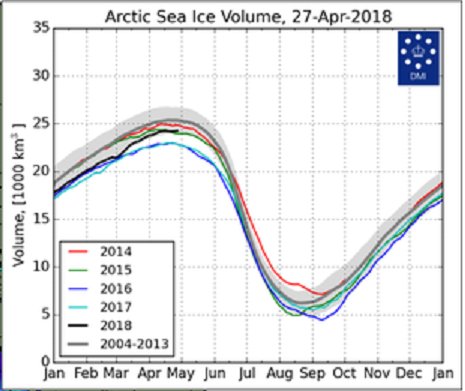 At Twitter Kirye posted an excellent GIF animation to compare Arctic sea ice thickness over the past 10 years:

Though a bit below normal, clearly the Arctic ice appears to be rebounding, thus confirming a likely link to solar activity, as has been suggested by numerous scientific publications thus far.

Should solar cycle 25 turn out to be a weak one, then we’ll need to worry more about more cold icy winters over the next coming years. And expect embarrassed alarmist global warming scientists to blame it on the “The Atlantic overturning“.