The pressure and rush to go green: The technical integrity of Germany’s offshore wind parks gets cast into doubt after a wind turbine comes apart after just 8 years of operation. North Sea wind turbines may prove to be inadequately designed and thus unfit for safe operation. 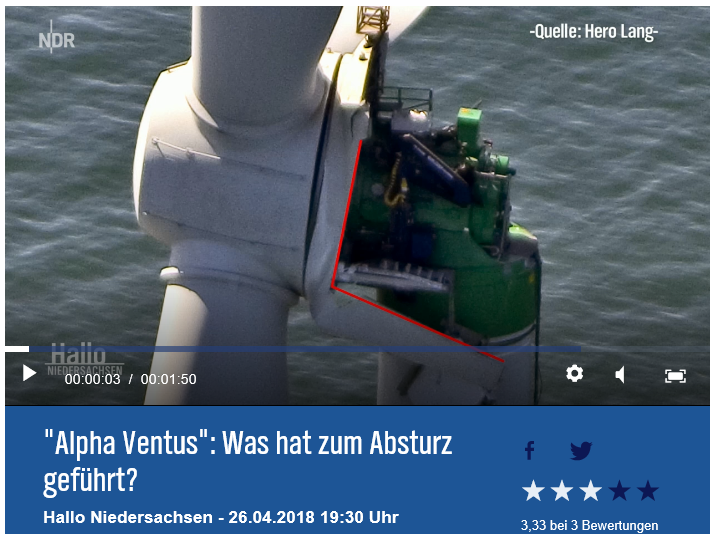 Housing rips away, plunges into the sea

The report was broadcast on 26 April and shows a missing turbine generator unit housing. Due to unknown reasons, the 3.5-tonne housing unit protecting the generator came undone and plunged some 90 meters into the sea. As a consequence, Bremerhaven-based turbine manufacturer Adwen has suspended operation the 5-MW fleet in the German North Sea. Technical crews are not even allowed near them until further notice – that includes 120 other turbines at two other wind parks.

The Alpha Ventus wind park is operated by energy producer EWE, which pegs the financial losses resulting from the damage at 40,000 euros daily.

Wind industry group WAB director Andreas Wellbrock said the housing ripped away earlier this month. When shown images of the damage by an NDR reporter, Wellbrock was speechless, stating it was something he had never seen before. The turbines had been inspected 2 years earlier, and approved for further operation.

The technical failure is yet the latest setback in a series of technical woes that have hampered offshore North Sea wind energy production, and threatens to turn the entire offshore project into a multi-billion euro engineering debacle.

According to the NDR German television report here, engineering experts speculate that the mishap may be due to the failure of the mounting bolts, probably caused by cyclic loading fatigue and/or corrosion – or because they were just simply undersized. The NDR adds:

That would mean that on all other units of this type would need to be improved. A total of 126 units have been installed in the North Sea.”

This includes the 400MW Global Tech 1 and the 200MW Trianel Borkum West 2.1 wind farms, as well as the remaining five Adwen M5000 machines at Alpha Ventus that are running in idling mode.”

Experts from manufacturer Adwen are also randomly inspecting 80 turbines operating at Global Tech 1 to determine if there are indications for similar risks. The Global Tech 1 turbines are not the same as the Alpha Ventus unit, but a “further development”.

When the pioneering Alpha Ventus wind park was put into operation in 2010, expectations were high, the NDR reports. Geologist Manfred Zeiler of the federal office for Seafaring and Hydrography implied that there was considerable pressure to get the “prototype” wind park into operation. But, the NDR reports that today policymakers “don’t want to hear anything” about pressure having been applied to get the park up and running back then.

The offshore turbines were designed for a lifetime of 20 years, but already the first has failed after just eight years. This may indicate that all the turbines of this type may be inadequate. In the NDR report, policymakers — such as Olaf Lies — place the blame on wind park investors.

The North Sea is notorious for its extremely harsh conditions, and many speculate that the turbines may have been under-designed. The NDR ends its report: “Perhaps the forces of nature were underestimated”.

If the forces of nature indeed were underestimated, meaning hundreds of offshore turbines already installed are technically inadequate, then Germany’s offshore wind energy problems are only just beginning.

German speakers will wish to read and watch report here. North Sea offshore parks could end up being a huge money maelstrom!