Lately Arctic sea ice volume has been a topic which climate skeptics have been looking at quite closely.

According to Al Gore and a number of climate ambulance chasers, Arctic sea ice in late summer should have long disappeared by now, see here..

But then just a few years after, the Arctic sea ice area began to recover from its lows of 2007 and 2012. So immediately alarmists shouted that area was not really what mattered, but rather sea ice volume is what really counted. Okay, that made perfect sense. Mass is in fact what’s important, and not area, when worrying about polar ice disappearing.

So naturally skeptics have since then been watching volume, which we were told by alarmists would shrink, and shrink, and shrink – until totally gone in late summer. In 2007 one US climate official declared the Arctic sea ice was in a “death spiral”.

Those alarmist projections have since turned up totally false

First, looking at peak ice, which occurs around April 1st, using the data from the Danish meteorological Institute (DMI) here, we find that Arctic sea ice VOLUME has totally defied the downward death spiral trend projected by experts and their models. 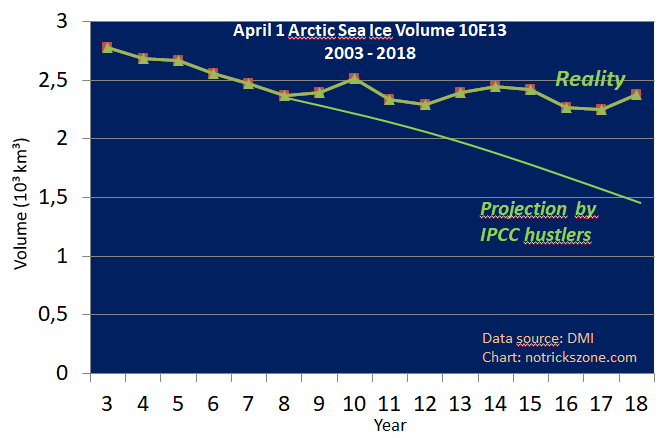 The chart above depicts Arctic sea ice volume on April 1st for the years 2003 to 2018, using the data from the DMI. Note the growing chasm between alarmist projections and reality.

Humiliation of the alarmists

The most closely watched measure of Arctic sea ice magnitude is the minimum that is typically reached in very late summer, i.e. around September 20.

Here’s the result of the plot: 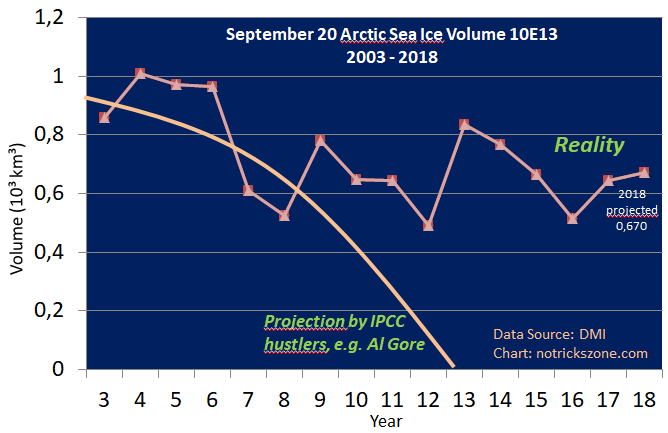 Today the doomsday scenarios and projections made 10 years ago have yet to show any signs of materializing. Late summer Arctic sea ice has been surprisingly stable over the past decade.  Gore and alarmists fell into the trap of applying an idiotic polynomial curve extrapolation into the future.

In fact there are indications that Arctic sea ice may be starting an upward trend as oceanic and solar cycles enter their cooler phases.

Low sea ice also occurred in the past

There’s no doubt that Arctic sea ice has dwindled considerably since it peaked back at around 1980, a time when climate scientists had warned the globe risked cooling into an ice age.

Also, today’s Arctic sea ice amount is in the same neighborhood as it was back in the 1930s. Moreover, today’s levels are considerbly higher than they were over a large part of the Holocene, which saw periods that were far warmer than today.