PhD physicist Ralph B. Alexander has authored a new book: Science Under Attack: The Age of Unreason. 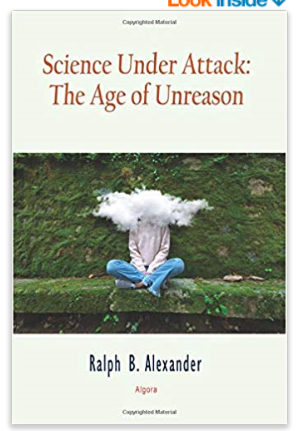 By Ralph B. Alexander

Conventional scientific wisdom holds that global warming and consequent changes in the climate are primarily our own doing. But what few people realize is that the actual scientific evidence for a substantial human contribution to climate change is flimsy. It requires highly questionable computer climate models to make the connection between global warming and human emissions of carbon dioxide (CO2).

No proof warming is human caused

The multiple lines of evidence which do exist are simply evidence that the world is warming, not proof that the warming comes predominantly from human activity. The supposed proof relies entirely on computer models that attempt to simulate the earth’s highly complex climate and include greenhouse gases as well as aerosols from both volcanic and man-made sources – but almost totally ignore natural variability.

So it shouldn’t be surprising that the models have a dismal track record in predicting the future. Most spectacularly, the models failed to predict the recent pause or hiatus in global warming from the late 1990s to about 2014. During this period, the warming rate dropped to only a third to a half of the rate measured from the early 1970s to 1998, while at the same time CO2 kept spewing into the atmosphere. Out of 32 climate models, only a lone Russian model came anywhere close to the actual observations. Not only did the models overestimate the warming rate by two or three times, they wrongly predict a hot spot in the upper atmosphere that isn’t there, and are unable to accurately reproduce sea level rise.

Yet it’s these same failed models that underpin the whole case for catastrophic consequences of man-made climate change, a case embodied in the 2015 Paris Agreement. The international agreement on reducing greenhouse gas emissions – which 195 nations, together with many of the world’s scientific societies and national academies, have signed on to – is based not on empirical evidence, but on artificial computer models. Only the models link climate change to human activity. The empirical evidence does not.

Correlation is not causation

Proponents of human-caused global warming, including a majority of climate scientists, insist that the boost to global temperatures of about 1.6 degrees Fahrenheit (0.9 degrees Celsius) since 1850 comes almost exclusively from the steady increase in the atmospheric CO2 level. They argue that elevated CO2 must be the cause of nearly all the warming because the sole major change in climate “forcing” over this period has been from CO2 produced by human activities – mainly the burning of fossil fuels as well as deforestation.

But correlation is not causation, as is well known from statistics or the public health field of epidemiology. So believers in the narrative of catastrophic anthropogenic (human-caused) climate change fall back on computer models to shore up their argument. With the climate change narrative trumpeted by political entities such as the UN’s IPCC (Intergovernmental Panel on Climate Change), and amplified by compliant media worldwide, predictions of computer climate models have acquired the status of quasi-religious edicts.

Warmists on the wrong side of science

Indeed, anyone disputing the conventional wisdom is labeled a “denier” by advocates of climate change orthodoxy, who claim that global warming skeptics are just as anti-science as those who believe vaccines cause autism. The much ballyhooed war on science typically lumps climate change skeptics together with creationists, anti-vaccinationists and anti-GMO activists. But the climate warmists are the ones on the wrong side of science.

Like their counterparts in the debate over the safety of GMOs, warmists employ fear, hyperbole and heavy-handed political tactics in an attempt to shut down debate. Yet skepticism about the human influence on global warming persists, and may even be growing among the general public. In 2018, a Gallup poll in the U.S. found that 36% of Americans don’t believe that global warming is caused by human activity, while a UK survey showed that a staggering 64% of the British public feel the same way. And the percentage of climate scientists who endorse the mainstream view of a strong human influence is nowhere near the widely believed 97%, although it’s probably above 50%.

Most scientists who are skeptics like me accept that global warming is real, but not that it’s entirely man-made or that it’s dangerous. The observations alone aren’t evidence for a major human role. Such lack of regard for the importance of empirical evidence, and misguided faith in the power of deficient computer climate models, are abuses of science.