In Berlin today, some 200 scientists shivered at a scientists4future demonstration in front of the Chancellor’s office in order to protest government inaction on combatting global warming. 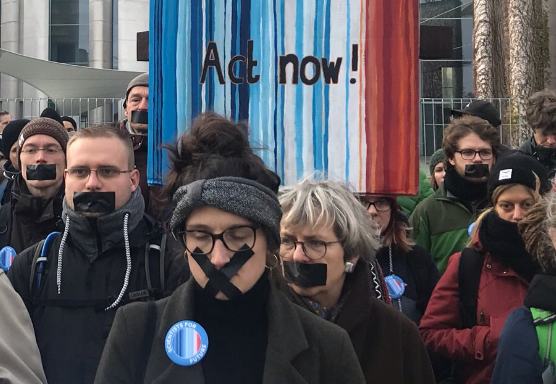 One prominent attendee was FridaysForFuture activist Prof. Volker Quaschning, who proudly took the day off from lecturing on taxpayer expense. Here’s what he tweeted just before attending the modest demonstration:

Quaschning, a HTW Berlin professor, is seen above at a bus stop on his way to the demonstration, holding the propaganda temperature stripe chart to protest the German government’s inaction on fighting global warming. Unfortunately the professor looks rather silly all dressed up for winter cold in gloves, knit hat, scarf and coat – to protest warming!

The activist Berlin professor wasn’t the only scientist trying to stay warm today while protesting climate warming. Two hundred other scientists also showed up in front of Chancellor Merkel’s office, all bundled up in winter clothes, demanding a stop to the warming and that they be listened to – instead of the working class taxpayers.

The science-is-settled scientists held up signs declaring, “Everything has been said! Act now!” or: “Decades of climate research: Ignored!”

The question is whether they will be taken seriously by the hundreds of millions of Northern Hemisphere inhabitants who are getting socked by a premature frigid winter this year.

The scientists4future all appeared with their mouths taped shut in order to symbolize a “silent protest”. Or perhaps the tape was to keep their teeth from chattering as they shivered in the bitter November cold.

Of course, the scientists didn’t stick around too long. Reportedly they left for an early start to the weekend – in the warm comfort of their homes.

Today the German government voted to pass measures that among other things will make heating and fuel more expensive for ordinary citizens starting next year.