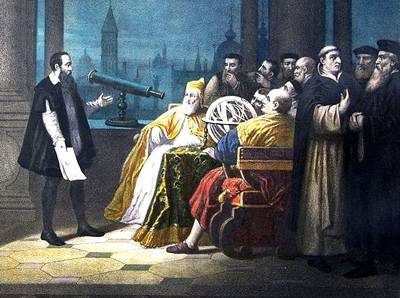 The German Research Foundation is back, again in favor of diversity of scientific opinion! Image: Galileo fails to change Catholic Church doctrine.

The DFG has put Nuhr’s statement back online again after realizing it had blundered when it caved in to activists and had not acted in the interest of science (pdf here).

What follows is DFG’s new statement in English (my emphasis added) expressing its regrets and announcing that Mr. Nuhr’s statement has been put back:

The DFG expressly regrets that the statement by Dieter Nuhr was taken hastily from the website of the online campaign #forknowledge. Mr. Nuhr is a person who stands at the heart of our society and is committed to science and rational discourse. Even if his pointed satirical nature may be irritating for some people, an institution like the DFG in particular is committed to the freedom of thought based on the Enlightenment. We have therefore reinstated his statement. The discussion about his statement exemplifies the developments that currently characterize many public discussions about science.

“A culture of debate has developed in various sectors of our society, in which it is often not the objective and stronger argument that counts, in which less is listened to and inquired about, but rather increasingly judged and condemned hastily. Instead of joint dialogue, increasingly polarized and divisive debates are taking the place of mutual dialogue. Particularly in the case of central issues such as climate change or the coronavirus pandemic, this hinders the really necessary discussion of scientific topics and the constructive exchange between science and society. Scientists who make their findings public and describe political options for action are increasingly the target of unobjective attacks and personal defamation. This also applies to social movements that advocate science and publicly call for scientific findings to be made more of a basis for decisions and actions.”

“These developments are not beneficial to society and are all the more worrying as science plays a central role in meeting current challenges, with which it is currently strongly perceived and valued in society. For its part, it is dependent on a critical, OPEN and constructive culture of communication.”

“The DFG would like to take these observations as an opportunity to initiate an intensive debate on the current debate culture surrounding science. The DFG stands for diversity of opinion and freedom of expression as well as for a differentiated culture of discussion. It will continue to do everything in its power to achieve this in the future – together with other figures from science, media, politics and other areas of society, both in Germany and abroad.”

What follows below is Nuhr’s original statement which the DFG “hastily took down” when it caved to public pressure from activists and ideologues. There’s nothing wrong with this statement:

Knowledge does not mean you are 100% sure, but that you have enough facts to have a reasoned opinion. But many people are offended when scientists change their mind: That is normal! Science is just THAT the opinion changes when the facts change. This is because science is not a doctrine of salvation, not a religion that proclaims absolute truths. And those who constantly shout, “Follow science!” have obviously not understood this. Science does not know everything, but it is the only reasonable knowledge base we have. That is why it is so important.”

Now after public outrage across Germany, Nuhr’s statement has been reinstated. A big victory for open science!