A German expert joins renowned physicists in pointing out that the climate data harbor far too much uncertainty and that conclusions drawn from such data are “pseudoscience”.

It is a fact that land surface temperature records going back before 1900 globally are very few and sparse. Worldwide there are only 116 stations Version 3, unadjusted datasets going back to January 1880 – most of them are located in USA (northern hemisphere). 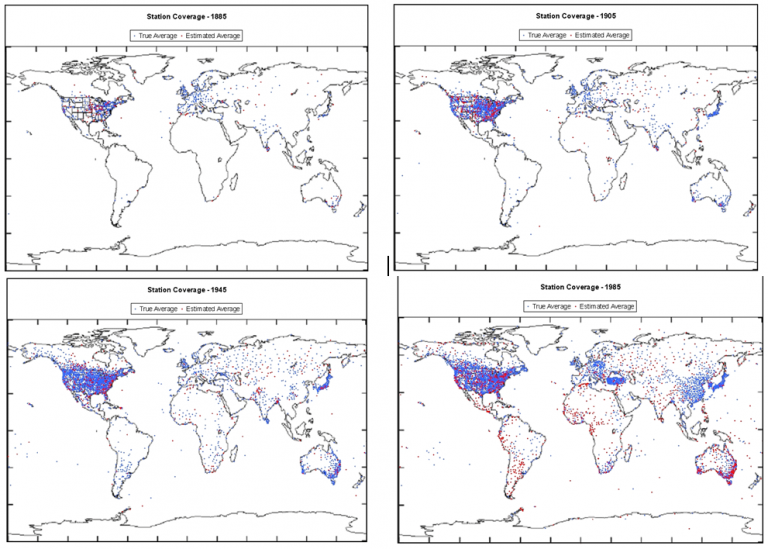 The temporal development of temperature measurement stations distributed over the earth over a period of 100 years, 1885-1985. Source: Energy & Environment · Vol. 22, No. 4, 2011; Pat Frank “Imposed and Neglected Uncertainty in the Global Average Surface”.

In 1880 it was just 116 stations for measuring the earth’s 510.1 million km². Obviously the data are nowhere near sufficient to allow any conclusions having any degree of certainty.

In his essay, Karl examines the available database and how the whole discussion about “climate change” and “global warming” is based on the temperature data of the last 170 years, i.e. the start of the Industrial Revolution.

How reliable are the worldwide directly measured data of the last 170 years? Not very reliable at all, Karl concludes, citing renowned physicists like Freeman Dyson, and agrees with highly respected Norwegian-American physicist and Nobel Prize winner Ivar Giaever, who called climate science “a pseudo-science”.

In his essay Karl concludes:

The basis of all arguments and conclusions of the IPCC, climate scientists and climate alarmists is the available worldwide average temperatures since 1850. The time at the beginning of industrialization is, so to speak, viewed as the “absolute zero point” for the temperature development on our earth. This reference point was chosen because from that point on mankind contributed relevantly to the increase of the CO2 concentration in the atmosphere. The so-called anthropogenic CO2 contribution. But what is the use of having strong walls, massive ceilings and a solid roof if the foundation of a building is designed too weak? The fact is, the available temperature data (foundation) are subject to error. The magnitude of error is in a range where referencing this data makes no scientific sense. All the efforts of climate scientists with their increasingly powerful large computers will not improve the simulations of the future of the earth’s climate. The data base is poor, the knowledge of the highly complex climate still low (Freeman Dyson). Therefore, climate science, which focuses solely on the effect of anthropogenic CO2, remains a pseudo-science.”