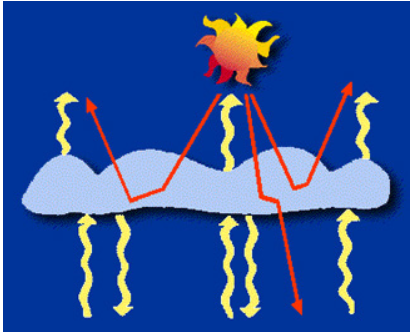 High clouds should be warming the planet, and low clouds cooling it, NASA says. Yet 16 years of their own satellite measurements don’t support the claim. Image: NASA.

The idea is to see the effect of clouds at the surface, especially the so-called Upwelling Longwave Radiation (LW_UP).

But first, NASA tells us high clouds are much colder than low clouds and the surface and so they radiate less energy to space than low clouds do. And because high clouds absorb energy so efficiently, they have the potential to raise global temperatures. In a world with high clouds, much of the energy gets captured in the atmosphere. High clouds make the world a warmer place. If more high clouds were to form, more heat energy radiating from the surface and lower atmosphere toward space would be trapped in the atmosphere, and Earth’s average surface temperature would climb.

NASA also adds that low stratocumulus clouds – on the other hand – act to cool the Earth system because they are much thicker and not as transparent. This means they do not let as much solar energy reach the Earth’s surface. Instead, they reflect much of the solar energy back to space (their cloud albedo forcing is large).

NASA adds that stratocumulus clouds radiate at nearly the same intensity as the surface and do not greatly affect the infrared radiation emitted to space (their cloud greenhouse forcing on a planetary scale is small). The net effect of these clouds is to cool the surface.

Zoe looked at 4 different types of observed LW_UP: All, Clr, AllNoAero, and Pristine. All is normal observed sky. Clr (clear) is no clouds. AllNoAero is All minus aerosols. Pristine is Clr minus aerosols.

Since clouds are said to play an important role in Earth’s supposed greenhouse effect, and this effect leads to a supposed serious warming at the surface, we should see a very large difference between all these 4 scenarios.

But when looking at the results, Zoe finds there is very little difference. The difference in surface LW_UP between a Pristine sky (no clouds, no aerosols) and All sky is just 0.82 W/m², she finds.

“I would even argue it might be ZERO. It’s only not zero because a satellite can’t measure the same scenario in the same place at the same time. They can only measure some place nearby or same place at another time,” reports Zoe. “Even if I’m wrong on this, this value is still very unimpressive.”

“Clearly not the case”

According to the greenhouse gas theory, infrared absorbing gases are supposed to be preventing radiation from reaching space, thus causing warming at the surface.

See Zoe’s article on this.