Though it has dropped since its peak in 1979, Arctic sea ice extent in March has remained stable since 2005.

There are two months that are of particular interest in the Arctic: September, when sea ice reaches its minimum, and March, when it reaches its maximum.

Today we look at Arctic sea ice extent data for March ,2021, from the Alfred Wegener Institute, University of Bremen. 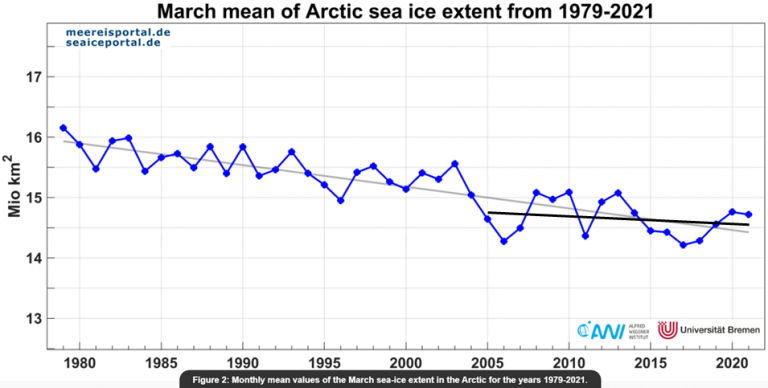 That’s an added area equivalent to the entire country of Spain.

As the above chart shows, March Arctic sea ice extent has been quite stable since 2005. A number of scientists have predicted years ago that Arctic sea ice would in fact be stabilizing, before rebounding in sync with natural solar cycles. Global warming scientists dispute the claim.

Now looking at Antarctica, it was claimed earlier that “more than 1/3 of Antarctica’s ice shelf could collapse due to global warming.” That’s what NASA said, referring to a study by the University of Reading. The study assumes a warming of 4 degrees Celsius.

However, most coastal stations don’t show any warming. And according to Alfred Wegener Institute, sea ice extent is  above the 1981-2010 mean: