A team of scientists believe they’ve made a forecasting breakthrough, suggesting the NAO is in fact highly predictable.

As the name implies, it describes the natural fluctuations in the difference of atmospheric pressure at sea level between the Icelandic Low and the Azores High. These fluctuations control the strength and direction of westerly winds and location of storm tracks across the North Atlantic, and thus much of Europe’s weather. It has nothing to do with CO2.

Having the ability to predict these fluctuations months ahead naturally would be a very useful tool for agriculture, commerce and overall preparedness.

Now German Die kalte Sonne reports in their 40th video how researchers have made “a breakthrough” forecasting the NAO. In a recent paper appearing in the journal Nature titled: “North Atlantic climate far more predictable than models imply“, by Smith et al.

The large team of researchers assessed climate model predictions of the past six decades and showed that “decadal variations in North Atlantic winter climate are in fact highly predictable, despite a lack of agreement between individual model simulations and the poor predictive ability of raw model outputs.”

The authors say that current models underestimate the predictable signal of the North Atlantic Oscillation by one full order of magnitude. 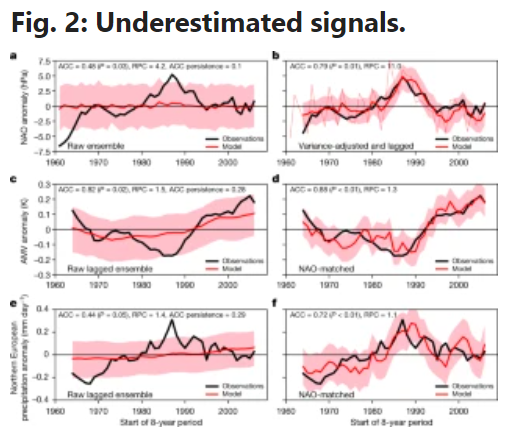 Now the scientists hope “to deliver robust NAO forecasts in the future,” reports Die kalte Sonne. There’s no mention of any connection to trace gas CO2.

In September 2020, a paper by Lüdecke et al studied the correlation of AMO, NAO and sunspots with European temperatures for the period 1901–2015 and found a strong link between the NAO and central/northern Europe December-March temperatures.

In April 2021, another paper by Luedecke et al, “Decadal and multidecadal natural variability of African rainfall“, showed how Africa climate variability was linked to natural oceanic and solar cycles.