In the second half of June, global warming catastrophe worshippers were already salivating worse than Pavlov’s dogs when Arctic sea ice melt accelerated at a dizzying rate (see 2nd chart down below).

Some datasets even show a refreeze occurring in late July! Source: http://arctic-roos.org/cearea.png

But in mid July, something happened unexpectedly: the North Pole saw one of its coolest summers since instrumental records have been kept, and sea ice melt also slowed down markedly, proceeding at a rate we normally only see only in the second half of August, see chart that follows: 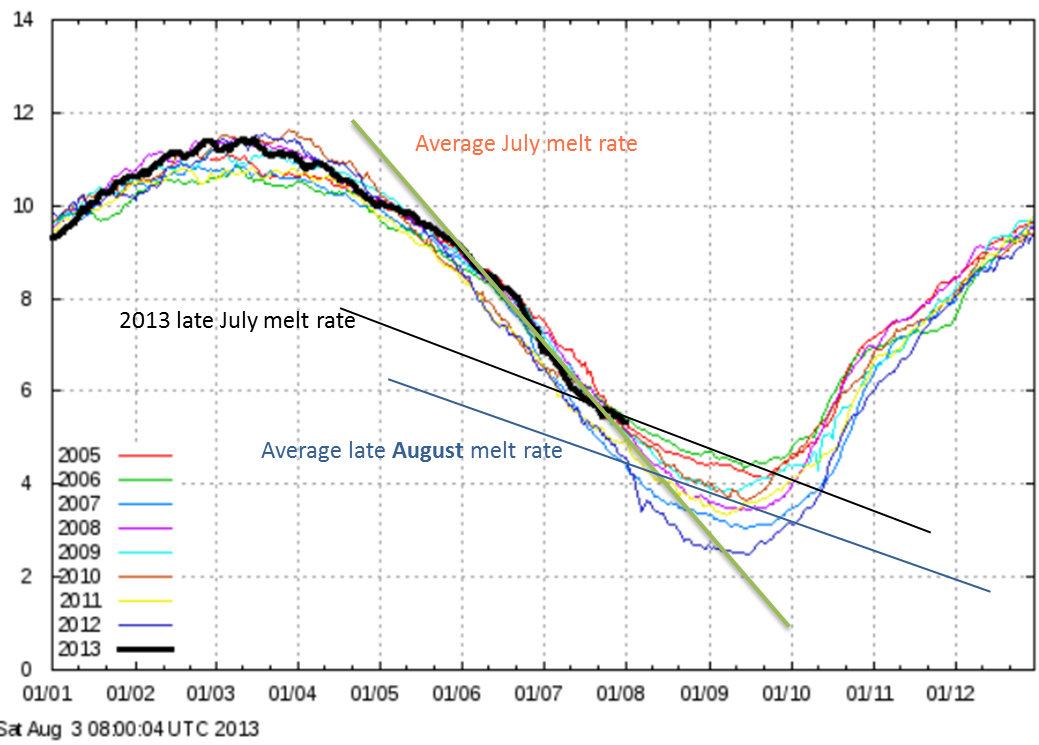 As the slope lines show, the rate of melting in the second half of July is something we normally see an entire month later, in late August.Source: http://ocean.dmi.dk/icecover_current.png.

Suddenly all the salivating among the alarmists has turned to gloom – no Arctic meltdown on which to feast upon this year.

But hope is still holding out among the alarmists as there is a chance some freak storm or something will scatter the sea ice and send the 2013 curve downwards to a near record low. But if 2013’s current course continues, then it will wind up closer 2005-2006 levels. That of course would be a major setback for the alarmists, who then would have to search elsewhere for disaster stories this fall. The next 10 – 14 days will be decisive.

As far as Antarctica is concerned, record highs are being recorded daily. Here we have absolute dead silence from the media and purveyors of gloom.

As the chances for an Arctic sea ice melt disaster fade with each passing day, expect the focus of the alarmists to increasingly shift to the hurricane season.