The alarmists at Skeptical Science put up a “Hiroshima Bomb Heat Clock” claiming that the earth’s climate system has “accumulated” over 2 billion Hiroshima bombs worth of thermonuclear heat since 1998. This heat, they say, will pop out in the future and make us all very sorry.

Yet, despite the hundreds of millions of Hiroshima heat bombs, we have seen 0°C of warming in the earth’s atmosphere during the very same period. Comically, despite the 2 billion plus climate ground-zeros, not a single one of them can be found in our atmosphere: 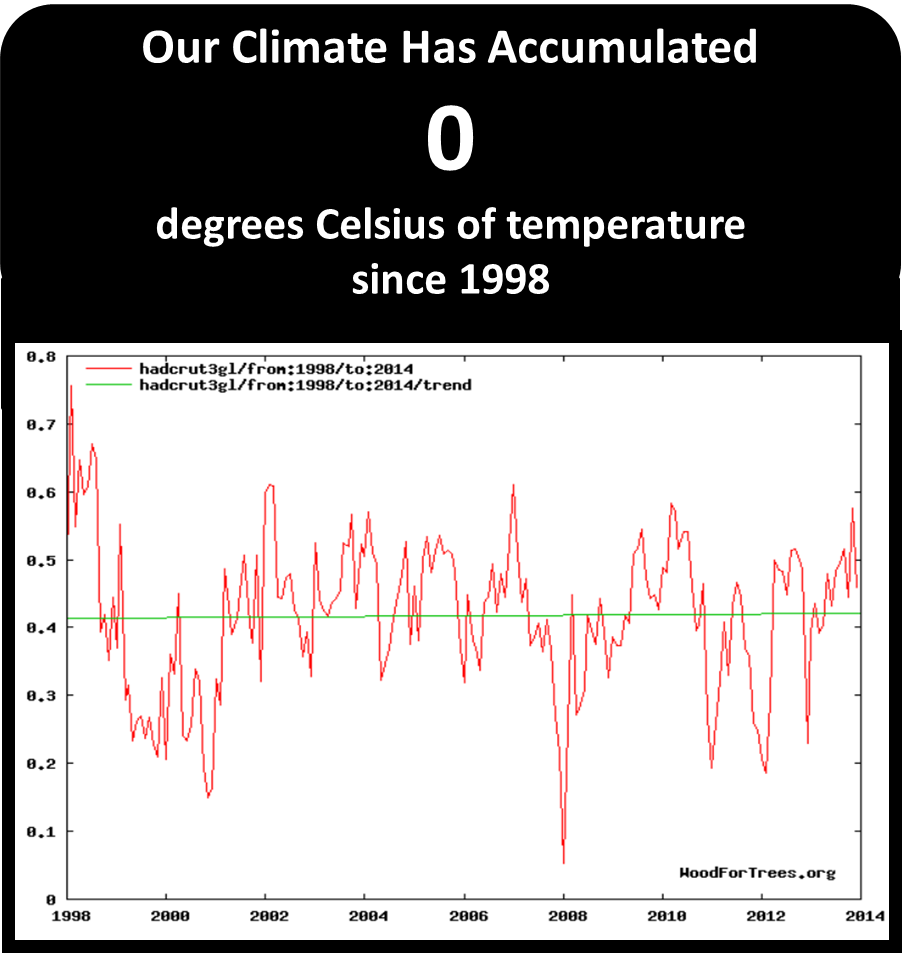 So where could all that heat possibly have gone? Why hasn’t the global atmospheric temperature gone up with all that accumulated (trapped) heat?

The answer is that a part of this alleged quantity of heat very likely has not been permanently trapped. A significant part likely has been re-radiated back out into space. Things like that happen when it’s a little warmer. Moreover, much of it probably has been absorbed by the oceans, whose sheer mass has a thermal heat capacity that is 100 times that of the atmosphere. Even SkS acknowledges this here.

The problem is that the SkS bedwetters would like to have us believe that the heat absorbed by the oceans is somehow getting packed in a compact suitcase, is getting transported around below the ocean surface for awhile, and that it will later get suddenly belched out back into the atmosphere almost all at once. This is a story that is either the product of astonishing ignorance or a malevolent desire to deceive.

That’s not the way heat behaves, of course.

Think of it as hot water getting introduced into a bath tub filled with cool water. The heat just doesn’t stay together in a clump and swim around waiting to scald you 30 minutes later, rather it quickly gets distributed via conduction and convection throughout the entire bathtub.

In a similar manner, heat absorbed by the ocean gets distributed around the ocean’s vast volume via convection and thermal conduction as well. It just doesn’t stay clumped together, hide for awhile, and later pop out all at once. It’s very complex and it just doesn’t work the way the SkS horror-storytellers say it does. In fact, none of their stories have turned out to be right so far. According to their fairy tales from ten years ago, the atmosphere was supposed to be some 0.3°C warmer today than it actually is.

2 billion Hiroshima bombs would heat the ocean a mere 0.024°C

The range of uncertainty in measuring ocean temperature is far greater. There are lots of zeros involved and hopefully I didn’t lose or gain one or two during the number-crunching. Remember, this is assuming that there really is 2.1 billion bombs of heat accumulated.

What we are talking about here is on the same order of magnitude as someone trying to heat his home with a single cigarette lighter…and hoping none of the heat escapes out of the house!

Of course added heat is not distributed throughout the ocean uniformly, but it is certainly not kept in a tidy little package either. Ocean currents are still very poorly understood.

The Hiroshima heat clock is a gimmick

So why has SkS come up with this somewhat idiotic and reality-remote Hiroshima heat-bomb-clock? It’s a gimmick. It’s to distract the readers from the embarrassment of no global atmospheric warming since their silly clock started counting.

We’ll get our natural ENSO heat releases and absorptions and the corresponding heating and cooling in the atmosphere. But at the same time, any external heat absorbed by the ocean will get distributed with much of it is likely not coming back out for a very long time…and only when the atmosphere cools.

24 responses to “SkS Hiroshima-Bomb Heat-Clock Fraud …Claim 2.1 Billion Climate Ground-Zeros, Yet Can’t Find A Single One Of Them!”