NOAA Devolving To An Orwellian Political Farce…Veteran Meteorologist: “Fox Is Guarding The Henhouse”

Share this…FacebookTwitterThe NOAA recently declared several months of this year as being the hottest on record, standing out in stark contrast to other datasets and observed reality. The NOAA claims seem to be so odd that it has become the target of heavy criticism and ridicule (see here, here, here and here), especially with the backdrop […] 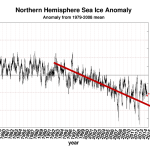 Just How Sure Are The Sea Ice “Experts” About The Arctic Melt Continuing? Looks Very Close To Zero…

Share this…FacebookTwitterRecently the Alfred Wegener Institute (AWI) in Bremerhaven, Germany released a press clipping about polar sea ice, obstinately refusing to acknowledge that there is a trend change happening in the Arctic. It wrote: The area of sea ice in the Arctic fell to a summer minimum of around 5.0 million square kilometres this year, […]

Share this…FacebookTwitterGermany’s major media takes a landmark step, one could argue. At their Die kalte Sonne site, geologist Dr. Sebastian Lüning and chemist Prof. Fritz Vahrenholt point out a recent article appearing in Germany’s no. 1 daily by circulation (2.5 million), Bild. Apparently the Axel Springer publication is getting fed up with all the global warming […]

Share this…FacebookTwitterSome years ago German “climate experts” were all forecasting hot, dry summers for Germany. But now, after a series of wet summers, they are telling us we have to expect wet summers in the future. Nobody knows what to believe anymore. One day they say prepare for this, and the next day they say prepare […] 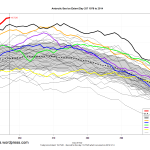 Share this…FacebookTwitterHere’s proof that mainstream media journalism is either sloppy and just too lazy to check the data themselves, or is catatonically stuck in their now 18-year long illusion of global warming. Recently a number of leading media outlets trumpeted (loudly) scary claims of “accelerating polar ice melt”. For example last May Germany’s leading online financial […]

Share this…FacebookTwitterScience journalist Michael Odenwald at the German news weekly FOCUS used to be quite the warmist, and maybe he still is. But his latest article here tells us that he may be opening up to other climate change explanations: natural factors such as solar activity. Solar activity has quieted over the last years. Photo image: […] 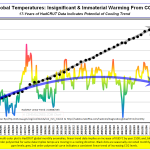 Share this…FacebookTwitterGerman center-left, climate alarmist daily Die Zeit here writes about the latest report from the World Meteorological Organization (WMO) which states atmospheric greenhouse gases have reached “a record high”. The results are based on data from 2013. Chart Source: www.c3headlines.com What is interesting about the Die Zeit piece is that it now talks about the oceans’ […]

Share this…FacebookTwitterWhat follows is the Arctic part of Prof. Fritz Vahrenholt’s and Frank Bosse’s recently posted article: The sun August 2014, the internal variability of the climate and the latest on Arctic ice. Time permitting, I will do the translation of the solar part a little later. ================================ The Latest News On Arctic Ice By Prof. Fritz […] 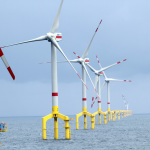 Share this…FacebookTwitterAs climate observations continue their now obscene divergence from the earlier IPCC model projections, some media outlets are becoming harsher in their criticism of a science that increasingly appears corrupt and politicized. Moreover climate scientists are looking ever more shrill and desperate. Hat-tip: hajo. A recent feature story by Markus Schär in the print edition […]