A wave of media hysteria has been unleashed by the recent hot and dry “Sahara” weather Europe has seen over the past few weeks. Cries to shut down the coal power plants and to adopt vegan diets have reached peak volume!

The neurosis has gotten so bad, that flagship German media have been reporting new breath-taking claims.

For example Germany’s version of the BBC ARD German public television, here claimed that CO2 is not only “killing the climate”, but is also even “causes lung disease”!

In the US, NBC meteorologist Al Roker here did have some good news: Global warming is now causing less hurricanes (and not more): The melting Arctic ice is cooling the Atlantic, which works against the formation of hurricanes, he claimed.

“Not heat problem, rather hysteria problem”

But among the cacophony of hysteria emanating from the global fake news construct, there have been a few remaining voices of sanity – fortunately.

In the opinion piece Krauel writes:

There have been many hot summers, as well as rainy cool ones. Germany does not have a heat problem, and a look at the past shows this.”

Indeed according to Swiss meteorologist Jörg Kachelmann, July 2006 was much warmer than July 2018, by 2°C.

Going vegan our only hope

But over 2018 in some places they complain like end-of world preachers. It is the largest anomaly since records have been kept. Water will be in short supply, Sea level is rising. Become a vegan, otherwise it will continue like this.”

In the meantime, a cold front has passed through the continent, thus dislodging the blocking high behind the unusually summerlike weather which many had been enjoying.

Central European temperatures today as of 1 p.m. ranged only from the low sixties to low seventies Fahrenheit. 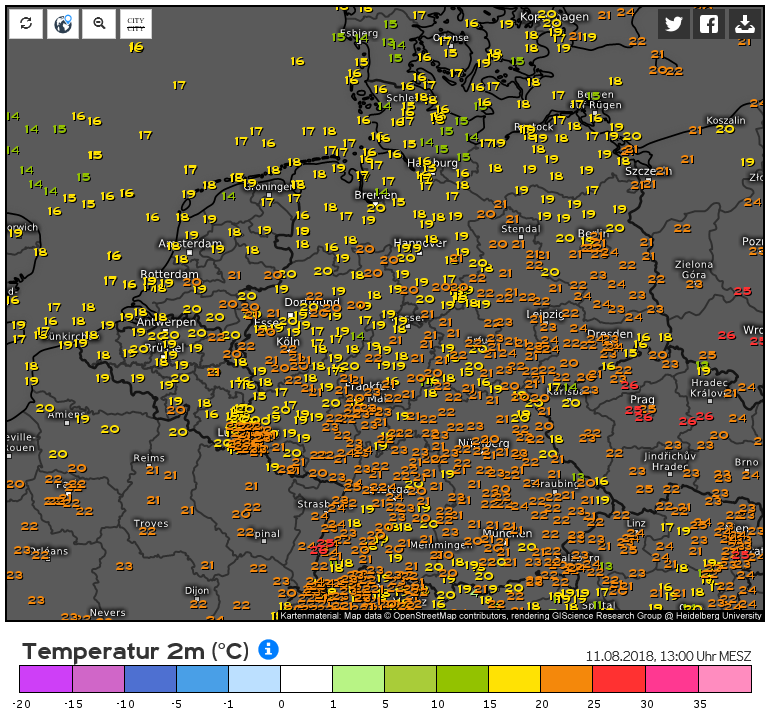 It won’t be long before we start hearing complaints about all the cool and damp weather and longings for summer.