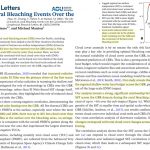 Share this… Facebook TwitterFor decades Great Barrier Reef (GBR) warming and coral bleaching have often been assumed to be driven by human greenhouse gas emissions and/or El Niño events. But a new study finds a much larger and more robust correlation between natural cloud cover modulation of solar radiation, shallow-water warming, and bleaching. It has […] 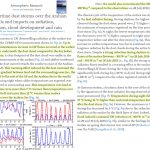 Share this… Facebook TwitterScientists publishing in GRL once again affirm that in recent decades the dominant mechanism driving surface melt for the Greenland ice sheet has been downwelling shortwave radiation modulated by clearer skies (fewer clouds) and natural wind pattern changes. Greenland’s ice melt has not been driven by “longwave heating” from greenhouse gases in […]

Share this… Facebook TwitterThree new studies affirm the increase in absorbed solar radiation associated with decreased reflection by clouds (albedo) has been the “root cause” of the positive Earth Energy Imbalance and global warming since the early 2000s. Scientists (Loeb et al., 2021) have determined the rather uncertain positive trend in Earth’s Energy Imbalance (EEI) […]

Share this… Facebook TwitterIt has been assumed COVID lockdowns and their associated reductions in human CO2 emissions would be a “step in the right direction” with regard to climate change mitigation. But a new study finds the particulate (aerosol) pollution reductions from less industrial and transportation activity in Europe during the months of March to […]

Share this… Facebook TwitterTwo new studies refer to the natural decline in cloud and aerosol reflectivity and consequent rise in incoming solar radiation or sunlight duration as the explanation for warming trends across Europe. CO2 is not even mentioned as a factor in climate change. Scientists point out that, for Europe, “the decrease in cloud […]

Share this… Facebook TwitterCO2’s impact on the total net greenhouse effect (GHE) or longwave (LW) forcing trend has been offset by the dominant impact of cloud cover since the 1980s.  It is now widely accepted that changes in clouds, naturally driven by changes in atmospheric circulation, “may be the most important parameter controlling the radiation […]