Share this… Facebook Twitter With data showing individual death risk from natural disasters (floods, droughts, hurricanes, tornadoes…) declined from 7.2 per million population in the 1990s to 5.6 in the 2010s, a new study takes aim at the IPCC’s “subjective opinion” labeling method in the manufacture of climate alarm. Per an exhaustive data analysis (Broccard, […] 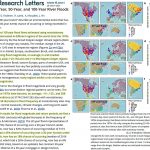 Share this… Facebook TwitterIn contrast to alarming claims about rare, 100-year flood events now occurring every few years due to global warming, scientists have determined the exact opposite is more likely true. Not only have flood frequencies declined globally in the last 50 years, but the probability of a 100-year flood event is now so […]