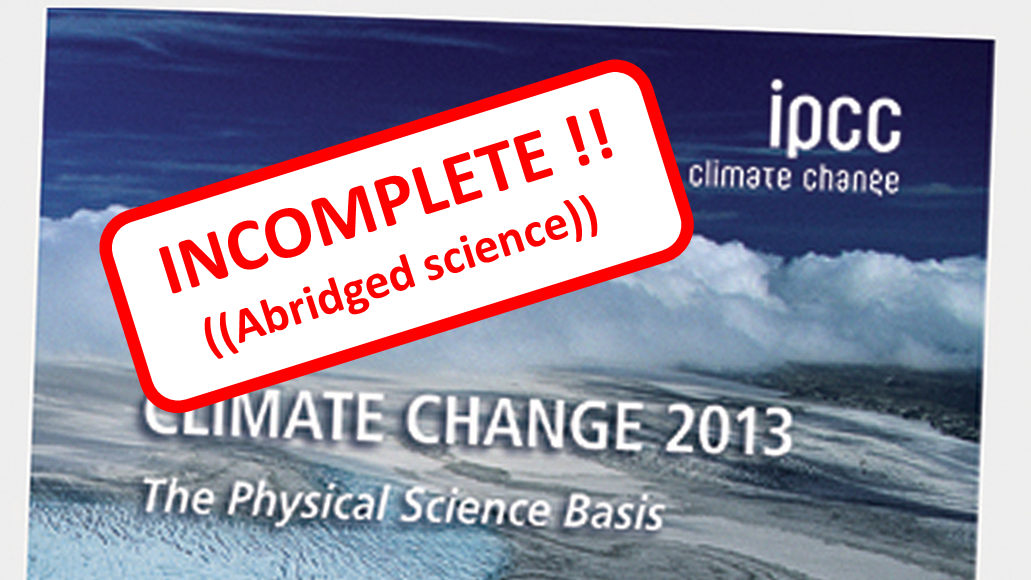 Proven by thousands of temperature datasets, the earth’s climate fluctuated cyclically in the past, and there’s an overwhelming body of evidence showing a close correlation with solar activity and other powerful natural factors. If the IPCC had truly examined past temperature developments and compared them to solar data, they’d have seen there is something remarkable there.

Yet in the IPCC AR5, Working Group 1 takes only a cursory look at solar activity and its possible impacts on climate in IPCC AR5 before simply dismissing the sun altogether. The Earth’s sole supplier of energy, the sun, and all its dynamism, in fact gets only a couple of pages in a 2200-page report, about 0.1%. That alone is a monumental scandal. It’s incompetence and negligence on the grandest of scales.

This will certainly go down in the books as one of the greatest scientific debacles of human history.

If the IPCC had directed the same energy and resources to make the sun and natural factors the culprit for climate change as it has with CO2, they’d certainly have a far more convincing case today,and many of the questions it claims are still open would be closed. But obviously the IPCC’s sole intent is to frame mankind and its CO2 emissions as the culprit for something that stopped happening 16 years ago. This is fraud, not science.

I spent half a day searching for papers that provide evidence of a significant impact on climate by the sun and natural factors, and another full day sorting through them. I limited the scope of the search to 2008 – 2012, i.e. papers since the last IPCC report. There are many more papers of course prior to 2008.

What follows is a list of papers I found in just a few hours that the IPCC should have taken a much closer look at instead of just dismissing. The list of course is not complete.

An excellent resource that really speeded things up was the site:

Popular technology is actually a list of 1100 papers that the IPCC wishes did not exist.

For some of the papers I’ve included links to additional information and some important quotes. Unfortunately I was not able to do this for every paper as time is limited.

Because of this gross negligence/incompetence on the IPCC’s part, the AR5 fifth is at best a woefully incomplete work and thus has reached a faulty conclusion.

1. Using data to attribute episodes of warming and cooling in instrumental records, Ka-Kit Tung1 and Jiansong Zhou, 12/2012; “…anthropogenic global warming trends might have been overestimated by a factor of two in the second half of the 20th century.”

3. Significant Changes to ENSO Strength and Impacts in the Twenty-First Century: Results from CMIP5, Samantha Stevenson, 09/2012; read more here, “…ENSO amplitude does and does not respond to climate change...”

6. Radiation Budget of the West African Sahel and its Controls: A Perspective from Observations and Global Climate Models, Miller et al, 8/2012, read more here; “… GCMs underestimated the surface LW and SW CRF and predicted near zero SW CRE when the measured values were substantially larger…”

9. Impact of the solar cycle and the QBO on the atmosphere and the ocean, Petrick et al, 07/2012; Read more here. “…it is concluded that comprehensive climate model studies require a middle atmosphere as well as a coupled ocean to investigate and understand natural climate variability.”

10. Marine climatic seasonality during early medieval times (10th to 12th centuries) based on isotopic records in Viking Age shells from Orkney, Scotland, Surge and Barret, 07/2012; read more here . “…conclusion that the early MCA was warmer than the late 20th century by ~ 1 °C.”

11. Investigation of methods for hydroclimatic data homogenization, Steirou, E., and D. Koutsoyiannis, 07/2012; read more here. “…results cast some doubts in the use of homogenization procedures and tend to indicate that the global temperature increase during the last century is between 0.4°C and 0.7°C…”

15. Does the Sun work as a nuclear fusion ampliﬁer of planetary tidal forcing? A proposal for a physical mechanism based on the mass-luminosity relation (PDF), Nicola Scafetta, 06/2012, Journal of Atmospheric and Solar-Terrestrial Physics, Volumes 81–82, pp. 27-40.

16. Holocene glacier fluctuations and climate changes in the southeastern part of the Russian Altai (South Siberia) based on a radiocarbon chronology, 06/2012; read more here.

20. Changes in climate variability in Central Europe during the past 250 years 05/2012 read more here.

31. Multi-scale harmonic model for solar and climate cyclical variation throughout the Holocene based on Jupiter–Saturn tidal frequencies plus the 11-year  solar dynamo cycle (PDF), Nicola Scafetta  03/2012, Journal of Atmospheric and Solar-Terrestrial Physics

37. High-resolution sea surface reconstructions off Cape Hatteras over the last 10 ka, Cléroux et al, 02/2012; read more here. “The last decade of paleoclimate research has shown that the Holocene is not the stable, climatic event-free period as previously thought: both external and internal (oceanic) forcings have caused major climatic changes.”

40. Possible evidence of the resonant influence of solar forcing on the climate system. Gusev and Martin, 01/2012; read more here.

41. Solar and volcanic fingerprints in tree-ring chronologies over the past 2000 years, Breitenmoser et al, 2012. “...significant periodicities near the DeVries frequency during the entire past 1500 years, pointing to a solar imprint on global climate.”

46. A possible solar pacemaker for Holocene fluctuations of a salt-marsh in southern Italy, Di Rita, 12/2011; read more here. “…important fluctuations in the extent of the salt-marsh in the coastal Tavoliere plain are related to variations of solar activity.”

49. Mesospheric temperature trends at mid-latitudes in summer, Berger et al, 11/2011; “…This large cooling is primarily caused by long-term changes of ozone in the upper stratosphere in combination with a CO2 increase.”

52. Mid-Holocene variability of the East Asian monsoon based on bulk organic δ13C and C/N records from the Pearl River estuary, southern China , 2011, read about it here.

53. Short term climate variability during “Roman Classical Period” in the eastern Mediterranean, Liang Chen et al, 10/2011; read more here . “…suggests that solar variability might be one of the major forcings of the regional climate.”

55. Amplitudes, rates, periodicities and causes of temperature variations in the past 2485 years and future trends over the central-eastern Tibetan Plateau, 09/2011, LIU Yu; read more here. “The long-term trends (>1000 a) of temperature were controlled by the millennium-scale cycle, and amplitudes were dominated by multi-century cycles. Moreover, cold intervals corresponded to sunspot minimums. The prediction indicated that the temperature will decrease in the future until to 2068 AD…”

57. The Evolution of the Albufereta Lagoon (Western Mediterranean): Climate Cycles and Sea-Level Changes , Garcia and Morilla, 08/2011; read more here. “…the two periods of most frequent superstorm strikes in the Aigues-Mortes Gulf (AD 455 and 1700-1900) coincide with two of the coldest periods in Europe during the late Holocene…”

63. Holocene hydrological changes in south-western Mediterranean as recorded by lake-level fluctuations at Lago Preola, a coastal lake in southern Sicily, Italy, Magny et al, 06/2011; read more here. “…climate oscillation around 7500 – 7000 cal BP may have resulted from combined effects of a strong rate of change in insolation and of variations in solar activity.”

65. Temperature prognosis based on long sunspot cycle 23, Solheim et al, 05/2011, read more here. “…We find that for the Norwegian local stations investigated that 30-90% of the temperature increase in this period may be attributed to the Sun. For the average of 60 European stations we find !60% and globally (HadCRUT3) 50%.”

67. A new approach to the long-term reconstruction of the solar irradiance leads to large historical solar forcing (PDF), A. I. Shapiro et al., 04/2011, Astronomy & Astrophysics, Volume 529, A67

68. Variations in climate parameters at time intervals from hundreds to tens of  millions of years in the past and its relation to solar activity, O. M. Raspopov et. al., 02/2011, Journal of Atmospheric and Solar-Terrestrial Physics, Volume 73, Issues 2–3, pp. 388–399

77. The Influence of the Atmospheric Transmission for the Solar Radiation and Earth’s Surface Radiation on the Earth’s Climate (PDF), Habibullo I. Abdussamatov, Alexander I. Bogoyavlenskii, Sergey I. Khankov, Yevgeniy V. Lapovok, 10/2010, Journal of Geographic Information System, Volume 2, Number 4, pp. 194-200

78. A new reconstruction of temperature variability in the extra-tropical northern hemisphere during the last two milleina, Ljungqvist, 09/2010; “…mean temperatures seem to have reached or exceeded the 1961–1990 mean temperature level during substantial parts of the Roman Warm Period and the Medieval Warm Period.”

81. Empirical evidence for a celestial origin of the climate oscillations and its implications (PDF), Nicola Scafetta, 08/2010, Journal of Atmospheric and Solar-Terrestrial Physics, Volume 72, Issue 13, pp. 951-970

84. Why Hasn’t Earth Warmed as Much as Expected?, Schwartz et al, 05/2010: read more here. “…The observed increase in global mean surface temperature (GMST) over the industrial era is less than 40% of that expected from observed increases in long-lived greenhouse gases…”

86. Variations in tree ring stable isotope records from northern Finland and their possible connection to solar activity, Ogurtsov et al, 02/2010; read more here. “…carbon and oxygen stable isotope records reveal variations in the periods around 100, 11 and 3 years. A century scale connection between the 13C/12C record and solar activity is most evident.”

87. Variations in climate parameters at time intervals from hundreds to tens of millions of years in the past and its relation to solar activity , Raspopov et al, 02/2010; read more here. “… analysis of 200-year climatic oscillations in modern times and also data of other researchers referred to above suggest that these climatic oscillations can be attributed to solar forcing.”

89. Solar Minima, Earth’s rotation and Little Ice Ages in the past and in the future: The North Atlantic–European case, Nils-Axel Morner, 01/2010, Global and Planetary Change

101. Tropical Water Vapor and Cloud Feedbacks in Climate Models: A Further Assessment Using Coupled Simulations, Sun et al, 03/2009; read more here. “…underestimating the negative feedback from cloud albedo and overestimating the positive feedback from the greenhouse effect of water vapor over the tropical Pacific during ENSO is a prevalent problem of climate models.“

110. Using the oceans as a calorimeter to quantify the solar radiative forcing (PDF), Nir J. Shaviv, 11/2008, Journal of Geophysical Research, Volume 113, Issue A11

118. Proxy-based reconstructions of hemispheric and global surface temperature variations over the past two millennia, Mann et al, 2008; “…The reconstructed amplitude of change over past centuries is greater than hitherto reported, with somewhat greater Medieval warmth in the Northern Hemisphere, albeit still not reaching recent levels.” (Thanks for the correction, MHB).