Share this…FacebookTwitterAfter days of uncertainty, Hurricane Matthew finally took a track taking it directly to Florida. It’s the first major category hurricane to hit the sunshine state (and the US, if I’m not mistaken) in almost 11 years. The last major hurricane to strike was Wilma in 2005. This 4000-day hiatus is a record since hurricane statistics […] 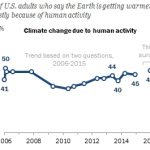 Only 53% Of Climatologists & Meteorologists, 36% Of Engineers & Geoscientists, 19% Of Agronomists Are ‘Consensus’ Believers

Share this…FacebookTwitterAmericans’ beliefs about climate change were recently surveyed by the Pew Research Center, and the results were made public a few days ago.  Pew pollsters found that a combined 51% of Americans agree that (a) there is no clear evidence the Earth is warming, or (b) natural factors are the main cause of climate changes. […]

Share this…FacebookTwitterContrary to what is often claimed, Arctic sea ice is not in a death spiral, and has been stable for the past 10 years. Yesterday Japanese skeptic blogger Kirye informed at Twitter that the sea ice volume and area rates of growth for September and early October this year are astonishingly rapid and at […]

Share this…FacebookTwitterFirst vigorous support followed by cheers But then came silence and then denial, Followed by downplaying Today, outrage is exploding That’s the story of Germany’s attempted Energiewende (transition to renewable energies). The mood has turned 180° since the early days. Once welcome, Germany’s Energiewende is now being met with shock and outrage as the envoiornmental […] 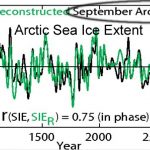 Scientists: The Arctic Was Sea-Ice-Free, 19°C Warmer 4 Million Years Ago — And Yet Polar Bears Somehow Survived

Share this…FacebookTwitter“Whether polar bears are 350,000 years old or 6 million years old, unless we take action to curb greenhouse gas emissions, they face a future where the climate will continue to warm. And this warming will be unlike anything polar bears have survived before.”  —  Polar Bears International Image: NoTricksZone During the Pliocene, or […]