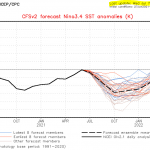 Share this… Facebook TwitterNot long ago Dr. Roy Spencer published Version 6 University of Alabama-Huntsville satellite-based global average lower tropospheric temperature (LT) anomaly for June, 2021. It was -0.01 deg. C, down an impressive  0.7°C since the peak in early 2016. As Dr. Spencer’s chart above shows, temperatures are back within the range seen 20 […]

Share this… Facebook TwitterAnalyzing the cyclic nature of solar activity, leading scientists suggest a solar minimum is set to persist until 2050. It’s important to estimate the features of the next solar cycle because they serve to improve preparedness in space exploration and minimizing risks in technological and sociological activities. The ability to understand historical […]

Share this… Facebook TwitterA groundbreaking new study in Science suggests warm interglacial-like conditions (surface temperatures within 1°C of today’s) persisted from 54 to 42,000 years ago even though CO₂ levels idled around 200 ppm at that time. A sudden geomagnetic shift that intensified galactic cosmic rays and cloud formation and reduced ozone levels ~42,000 years […]

Share this… Facebook TwitterTwo new studies refer to the natural decline in cloud and aerosol reflectivity and consequent rise in incoming solar radiation or sunlight duration as the explanation for warming trends across Europe. CO2 is not even mentioned as a factor in climate change. Scientists point out that, for Europe, “the decrease in cloud […]

Share this… Facebook TwitterCO2’s impact on the total net greenhouse effect (GHE) or longwave (LW) forcing trend has been offset by the dominant impact of cloud cover since the 1980s.  It is now widely accepted that changes in clouds, naturally driven by changes in atmospheric circulation, “may be the most important parameter controlling the radiation […]

Share this… Facebook TwitterHundreds of publications show how climate in many regions around the world varies in sync with solar activity. More evidence is provided by Japanese climate scientist Kyoji Kimoto. ======================================= Climate Change Governed By The Sun By guest author Kyoji Kimoto, kyoji@mirane.co.jp January 22, 2021 I’ve compiled a list of six examples how […]

Share this… Facebook TwitterEuropean winter temperature variability is “dominated” by the North Atlantic Oscillation (NAO), which is, in turn, modulated by solar activity. Even proponents of anthropogenic global warming (AGW) agree natural processes (AMO, NAO, ENSO, solar forcing, volcanism) drive temperature variability. But they insist the rising temperature trend is human-caused. So if we don’t […]